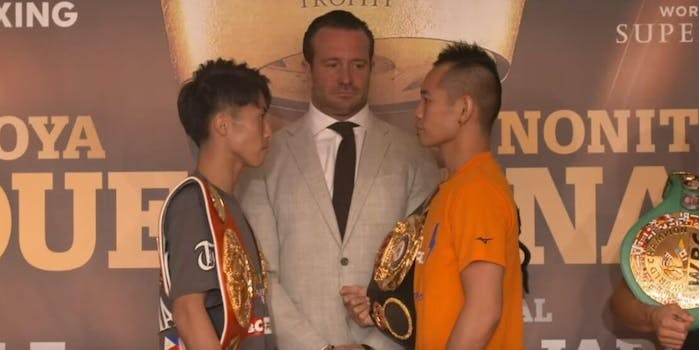 How to stream Naoya Inoue vs. Nonito Donaire

Donaire is a four-division world titlist. But he's never faced a 'monster' like this.

Naoya Inoue is nicknamed “Monster,” and it’s an apt moniker. Because he’s very scary in the boxing ring—or at least he’s been that way throughout his seven-year career. In the finals of the World Boxing Super Series bantamweight tournament that will be streamed on DAZN on Thursday morning, Nonito Donaire—formerly considered one of the top best fighters in the world—will see if he can slay Inoue.

It’s not likely to happen. I have Inoue ranked No. 5 on my pound for pound boxing list and Donaire is 36 years old, which is ancient by lower-weight boxer standards. But Donaire is holding out hope that he can find one more flash of brilliant boxing.

“Like we saw with Canelo vs. Kovalev, height doesn’t matter, size doesn’t matter,” Donaire told reporters, via Boxing Scene. “Ultimately it’s about the game plan, and I believe I have the game plan to beat Inoue. And my experience will carry me through.”

It’s almost assuredly not going to be easy for Donaire, though.

Here’s everything you need to know to watch Inoue vs. Donaire without cable.

How to stream Inoue vs. Donaire without cable

The only legal way to watch Inoue vs. Donaire in the U.S. is on DAZN. Since September 2018, the streaming service has shown some of the most important fights in boxing, including the exciting World Boxing Super Series. DAZN showcased Canelo Alvarez knocking out Sergey Kovalev last week, and it featured Andy Ruiz upsetting Anthony Joshua for the heavyweight championship—the rematch will air in December. Gennadiy Golovkin has fought twice on the service since June, and don’t forget about Saturday’s Logan Paul vs. KSI rematch.

DAZN costs $19.99 per month or $99.99 for the entire year, but for fight fans, it’s been a great value. It streams more than 100 fight cards per year—including a large number of MMA cards with Bellator—and you can watch some of the best boxers in the world (like Alvarez, Joshua, and Golovkin) and some of the potential rising stars (like Devin Haney and Vergil Ortiz Jr). DAZN says it’s doing its best to try to kill the longtime boxing PPV model, but another perk of a subscription is getting to watch fighters like Inoue and Donaire on a regular basis that should get your blood pounding as the fists begin flying.

Inoue vs. Donaire: Why it matters

Inoue is only 5-foot-5, and for most of his career, he’s weighed between 108 and 115 pounds for his matches. But despite his slight status, he’s got one of the most powerful punches in the entire sport. Need an example? Check out this video below.

In his last seven fights, none of his opponents have lasted more than six rounds, and five times, Inoue (18-0, 16 knockouts) has scored knockouts in three rounds or less. And his resume includes impressive competition, including Emmanuel Rodriguez, Juan Carlos Payano, and Jaime McDonnell (all of whom are former bantamweight titlists).

Some in the boxing community are actually fearful for the health of Donaire (40-5, 26 KOs), who’s had a Hall of Fame career but who’s certainly on the backside of it.

“To see where my career has been and what people have said about where I am and coming back to the division, it inspires me, it motivates me, but most of all, it excites me,” Donaire said, via ESPN. “This is where I want to be.”

It wasn’t too long ago that observers wondered if it’d be better for Donaire to retire. After losing in his second pro fight, Donaire won 30 straight and collected world titles at the 112-pound flyweight and 115-pound super flyweight divisions. He had unified belts in the 122-pound junior featherweight division when he ran into Guillermo Rigondeaux, who easily out-classed Donaire in 2013.

After that, Donaire still beat solid fighters (call them B-level opposition), but more elite boxers soon began toppling him. He’s had plenty of success in the WBSS tournament, including a devastating knockout of Stephon Young in the semifinals, but Inoue is probably the scariest opponent of Donaire’s career.

“Fighting one of the world’s best boxers who [has] grown into a monster is a big motivation,” Donaire said, via the WBSS. “I’m just very excited. I don’t see myself with any disadvantages going into the final.”

He actually has a few physical advantages. He’s taller with a longer reach, and he’s competed at a heavier weight class. Theoretically, that could help him take the brunt force of Inoue’s punches a little better. But Inoue wouldn’t count on it.

“Nonito’s only advantage is his experience, he has been in many big fights,” Inoue said. “He is taller and his reach is longer, but that’s something we have prepared for. Training camp is over, now it’s time to recover and relax until fight night. The only thing I need to do is making myself 100% and show everything that I have in the ring.”