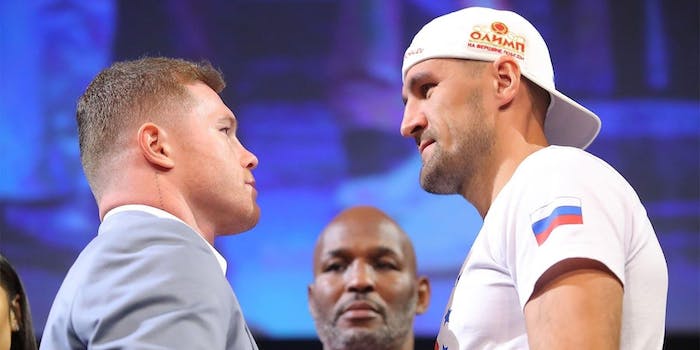 How to stream Canelo Alvarez vs. Sergey Kovalev

Canelo is looking for history.

Canelo Alvarez is one of the top three fighters in the world. But when he steps into the ring on Saturday night to meet Sergey Kovalev, live on the DAZN streaming service, he’ll face one of the stiffer challenges of his career.

Not because Kovalev is the best boxer Alvarez has ever faced—in fact, Kovalev is 36 years old, has been knocked out or hurt several times in the past few years, and is no longer the terrifying fighter he used to portray. It’s because Alvarez is moving up from the 160-pound middleweight division to the 175-pound light heavyweight division.

That means he’ll face a fighter who’s stronger than Alvarez is used to, and who probably can take his punches better than somebody who weighs 15 pounds less. But Alvarez is still a solid favorite, and that’s because, like we said two paragraphs earlier, he’s still one of the best on Earth to lace up boxing gloves.

Here’s everything you need to know to stream Alvarez vs. Kovalev live.

How to stream Canelo Alvarez vs. Sergey Kovalev without cable

The only legal way to watch Alvarez vs. Kovalev in the U.S. is on DAZN. Since September 2018, the streaming service has shown some of the most important fights in boxing. Though Alvarez, boxing’s biggest star, played tug-of-war with the service in finding his next opponent, DAZN is all in with him—and for good reason. DAZN also showcased Andy Ruiz upsetting Anthony Joshua for the heavyweight —the rematch will air in December—and it’s featured two Gennadiy Golovkin fights in the past four months. And don’t forget about next week’s Logan Paul vs. KSI rematch.

DAZN costs $19.99 per month or $99.99 for the entire year, but for fight fans, it’s been a great value. It streams more than 100 fight cards per year—including a number of MMA cards with Bellator—and you can watch some of the best boxers in the world (like Alvarez, Joshua, and Golovkin) and some of the potential rising stars (like Devin Haney and Vergil Ortiz Jr). DAZN says it’s doing its best to try to kill the longtime boxing PPV model, but another perk of a subscription is getting to watch fighters like Alvarez vs. Kovalev on a regular basis that should get your blood pounding as the fists begin flying.

Alvarez vs. Kovalev: Why it matters

This is one of the biggest fights of the year, and if Kovalev can somehow pull off the win, it would completely upend the sport’s hierarchy. The question is: Is it possible? The answer: Maybe, but probably not.

“It’s one thing for a fighter to jump up two weight classes but it’s a different kettle of fish to jump up two weight classes and challenge the biggest name in the division,” Joe Markowski, an executive with DAZN, said at a recent press conference. “Canelo, as we all know, is not your typical fighter. His drive to continually seek out new challenges is truly admirable.”

Let’s face it: Alvarez, at the age of 29, is already one of the best middleweights of the last few decades, and he keeps getting better. He has a long list of impressive victories prior to 2017—Shane Mosley, Erislandy Lara, and Miguel Cotto—but he’s gotten even better in the past two years, as he proved in his two fights vs. Golovkin, his brief sojourn to the 168-pound division to knock out Rocky Fielding, and his solid win vs. former middleweight titlist Daniel Jacobs last May.

Kovalev was formerly known as the “Krusher,” and he was one of the scariest fighters in all of boxing. He beat legendary Bernard Hopkins, and in a three-year stretch earlier this decade, he notched nine-straight knockouts. But then he lost a disputed decision to Andre Ward in 2016, and seven months later, Ward knocked him out with nasty body shots (though Kovalev’s camp said it was actually the result of illegal low blows).

Since then, Kovalev was knocked out by Eleider Alvarez, and though Kovalev looked good in outboxing Alvarez in the rematch, he was nearly stopped by Anthony Yarde two months ago before Kovalev ultimately knocked him out.

Kovalev is the bigger fighter vs. Alvarez, though, and that could be the defining factor.

“The main thing is to avoid those types of instances where we get in there and let Canelo feel comfortable,” Buddy McGirt, Kovalev’s trainer, said on a teleconference. “No matter what he tries to do, the key is to make him uncomfortable in anything that he tries to do. That only happened to him one time, and that was in the [Floyd] Mayweather fight, [the only loss of Alvarez’s career]. Mayweather made him uncomfortable and he really couldn’t get in his groove. After that, he became a better fighter and he was able to dominate everybody.”

That’s what Alvarez plans to do Saturday, especially if he can land his powerful shots to Kovalev’s body.

“It’s one of the most important punches for any fighter, and not just in this fight, in all fights,” Alvarez recently said. “But of course even more so with this fighter because that’s a weak point that he has, so we’re going to try to penetrate with the impact to the body.”

However Alvarez tries to win, oddsmakers are predicting him to do exactly that. As of this writing, he’s a -360 favorite, meaning you’d have to wager $360 on him to win $100.