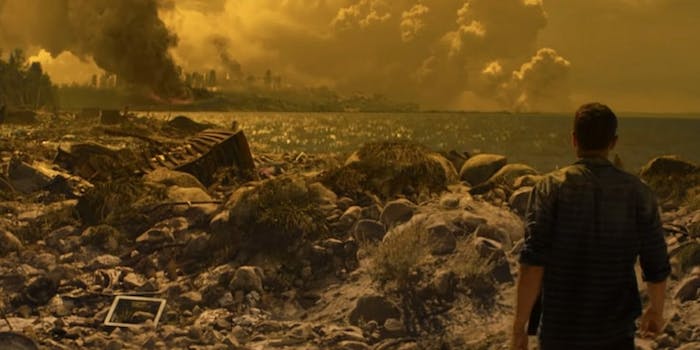 ‘How It Ends’ is an apocalyptic showcase for Forest Whitaker

The part-time action hero heads west in search of a better story.

Forest Whitaker is in the Nic Cage zone.

No matter the movie, Whitaker gives maximum effort and does his part to entertain. He can be great like he is in The Last King of Scotland, The Shield, Ghost Dog, or Where the Wild Things Are. In less-acclaimed projects, like Vantage Point, Panic Room, or Repo Men, he brings it. The world understands that he’s a great actor. But watching Netflix‘s How It Ends, I realized that we’ve taken him for granted. The film is a thoroughly mediocre apocalyptic thriller, and Whitaker is its most consistent element.

How It Ends is about two men traveling across the country to save a woman. The only thing standing in their way is a possible nuclear war or something equally destructive. The men are Will (played by Theo James) and Tom (Whitaker). Will is a corporate riser type and Tom is a hardass career military man. They’re connected by Sam (Kat Graham), Tom’s daughter and Will’s soon-to-be fiancée. When something mysterious knocks out power across the country, Will and Tom have to get from Chicago to Seattle to rescue Sam. So Will and Tom hop in a car and head west. Along the way, they encounter strangers, tenuous alliances, and a dwindling supply of gas and bullets.

How It Ends is never bad. Director David M. Rosenthal and cinematographer Peter Flinchenberg conjure up decent imagery, like a lightning storm or billowing clouds. There is an orange hue to the film’s night scenes that is interesting. Brooks McLaren’s script delivers a familiar road map of survivalist scenarios and relies too much on expository dialogue. The threat driving the whole movie is too vague to ever care about, but the characters keep you interested.

How It Ends lives in an awkward space. It’s competently made and easy to watch, but you know every move the thriller wants to make before it happens. Whitaker’s desperate humanity keeps you invested, however: He’s unflinching like Tom Cruise in War Of the Worlds, believable like a good Bruce Willis everyman, and moves with the fatherly passion of Denzel Washington in John Q. Not bad for a popcorn movie.