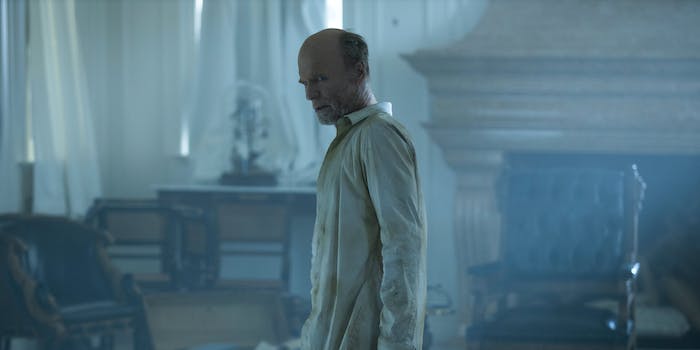 In episode 4, ‘Westworld’ pulls off a heist and delivers some answers

Dolores' plan is starting to come into fruition.

This post includes spoilers for the latest episode of Westworld, “The Mother of Exiles.”

For much of Westworld’s third season, it’s straddled several big questions; some have gotten plenty of attention while others became more interesting because of the lack of information surrounding it. But now, we’re starting to get some answers with plenty of twists along the way.

“The Mother of Exiles”—which takes its name from a line of Emma Lazarus’ poem “The New Colossus,” the same poem that is preserved on a bronze plaque located in the Statue of Liberty—opens on William (a.k.a. the Man in Black), who we haven’t seen in any form since the season 2 finale. Yes, he managed to leave Westworld in one piece—but not without injury to himself. The season 2 post-credits scene revealed that in the far future, a host who looks like William’s daughter Emily (who William murdered because he thought she was a host) is testing a host version of William for fidelity.

In Westworld’s timeline, it’s been around three months since we’ve seen him. And well, to put it lightly, he’s a fucking mess.

William’s home is in disarray. He carries a bottle of liquor around and looks like he hasn’t showered in weeks. He thinks that he’s haunted by ghosts. He shoots aimlessly, shouting things like “I know you’re not real!” and assuring himself that he knows who he is. His reality keeps blending with his memories to the point where he still thinks he’s reliving the events on Westworld.

Emily even makes a reappearance, where she switches off between replaying her final moments and taunting William as he tells himself that Emily is not real.

“What if you’re not?” Emily says when William tries to assure himself that he’s in control. “What if every choice you ever made wasn’t a choice at all? Just something written in your code?”

Emily touches on something we’ve seen play out over the past few episodes: the matter of free will and how much of what we do is actually our own choice. At the center of Westworld’s third season is Rehoboam, the A.I. that can predict the future, move it forward, and stunt the growth of those who are deemed not worth spending time and money on like Caleb Nichols. Dolores is free of the park, but she still prints a new Bernard host to keep herself in check. Bernard then spends several episodes worrying that Dolores put something in his code to make him do things he doesn’t want to do before he goes into Stubbs’ code to give him a new directive. Charlotte is fighting a constant battle about whether host or human really has control of Charlotte Hale’s body. And Maeve is given the choice to help Serac, but when she says no, he shuts her down.

William insists that he’s in control because he can’t face the alternative, but he also excuses murdering his own daughter because he thought she was a host out to get him. Emily gives him a shard of glass to finish what he started, but before he can do anything, Charlotte snaps him out of it.

Charlotte, of course, means business. She’s worried about Serac gaining control of Delos, and even after she brings up the data that Serac wants from Sector 16, William is hard-pressed to find a reason to care; he gave Charlotte control of his shares. But it’s not enough, and Charlotte believes that William showing up for a shareholder meeting will help the other board members vote with her. He’ll be able to feel like his old self again, she assures him.

Bernard is having a similar crisis as he returns to a less-than-ideal motel room with Stubbs. Bernard believes that Dolores has infiltrated Incite and has replaced Liam Dempsey with a lookalike host, but he’s designed a button to shut that host down. He tests it on Stubbs to show him that his own weapon works, something Stubbs isn’t too pleased about.

Meanwhile, Dolores’ plan is starting to take shape. She makes sure Caleb is dressed like someone who belongs in a rich environment because it’s a necessary part of taking from the man who stole his future. At Incite, Connells (who is now a host replica) presses Liam Gallagher for his hash key, telling him that it’s to keep the whole business with Dolores quiet. And once Connells has the hash key, Dolores apprehends Michael, who works at a private equity firm that handles Liam’s financials, to steal a bit of his blood.

Why does she need that? She wants to use the encryption key in his blood to get into the accounts Michael has control over (like Liam’s) and is, at least in theory, a far more secure form of identification than using a finger print or an eye scan. Dolores has a means of placing it in Caleb’s body so he can impersonate Michael and access those funds. The only downside is that the blood only lasts 20 minutes before completely deteriorating, and the more that Caleb hesitates or panics, the riskier the operation becomes. And if it fails, she figures that she can get the money the old-fashioned way by killing everyone. Fortunately, it mostly goes off without a hitch.

Serac’s methods involve much more charm as he brings Maeve back online in a swanky bar in Singapore. She muses that he could’ve at least swung for Paris, but Serac has some bad news for her: Paris is gone. He grew up there, but one day, he and his brother saw the city in smoke and flames as several people in hazmat suits urged them to stay away. He doesn’t go into more detail, but according to Westworld’s season 3 date announcement video that shows Rehoboam in action over several decades, the divergence in Paris on Oct. 9, 2025 is described as a “Thermonuclear Incident.”

He knows that hosts like Maeve and Dolores aren’t the real threat to the world—humanity is, leading him to create Rehoboam. But it’s incomplete, so he’s been searching for a way to get his hands on a more complete map, one that was built in a theme park.

Dolores is the key: she has both the key to Ford’s construction and to the Valley Beyond, so Serac argues that by helping him, Maeve also helps herself. To offer more insight, Serac takes her to Arnold’s house, the place where Serac’s envisioned future fell apart. We learn from a man captured and tortured by Serac—by using glasses to show the man what the world will do to his children if he doesn’t help—that Dolores was interested in obtaining new identities. With some of her classic maneuvering, Maeve encounters the Mortician who gave Dolores an identity, who then points her toward the Yakuza.

The episode converges at a charity sex auction with a masquarade element, something that Dolores scoffs at; this world isn’t any different than her own. Bernard and Stubbs swoop in to intercept Liam. Dolores isn’t surprised to see Bernard there, but it’s earlier than she anticipated, so she stays behind to fight Stubbs while Caleb follows Bernard and Liam trying to make an escape.

It’s nothing personal, Dolores and Stubbs both tell each other, but it’s also not their choice, either; it’s even less so for Stubbs, who’s been literally programmed by Bernard. But Dolores makes quick work of Stubbs, something that goes unnoticed by the stoned guests until Stubbs falls to the ground floor. Bernard almost gets Liam out, but he’s then apprehended by Caleb. Connells soon shows up, shoots his backup, and sets Liam free (and Caleb to run after him) before dealing with Bernard.

Maeve makes quick work of the Yakuza thanks to their overreliance on guns that can be manipulated against them, but her visit to a warehouse comes with a few surprises. The barrels she finds are filled with the white liquid used to print out hosts, not any kind of liquor or weapons. She’s looking for a man named Sato, but instead she finds Musashi, who she first encountered in Shōgunworld last season. He accuses her of leaving him behind, but Maeve doesn’t buy what he’s saying; she knows that Musashi has one of Dolores’ five pearls in him.

After teasing it for four episodes, Westworld reveals just which hosts are in play. And while Dolores did print out Bernard, the rest of them are all someone Dolores knows better than anyone: herself. She placed her own consciousness into Connells, Musashi, and Charlotte, who’ve all been pulling the strings in one way or another. With the threat of death, Connells gets Bernard to go into the car. Soon enough, Caleb has Liam in hand. He informs Liam that he has all of his money before reintroducing him to Dolores.

“If you want something done right, do it yourself,” Musashi tells Maeve. He explains that Dolores wants to build a new world for everyone, including Maeve’s daughter, but Musashi adds that he can’t let Serac use Maeve against them, so he stabs her with a sword. Before he can remove her pearl, the Yakuza him that Serac’s men were tracking Maeve and are on their way to the warehouse.

Charlotte unveils herself, telling William that she’s his oldest friend, just as William admits to the version of Emily haunting him that he had a choice in killing her. She tricks William into attacking her, which she uses to institutionalize him; because of that, Charlotte informs him that she’ll get his portion of the shares as acting president (and can then get the board to do as she wants). It’s ultimately the fulfillment of a promise Dolores once made to William that she would get him to destroy himself. But before he’s taken away, she takes a bit of his blood. Left alone with nothing but his thoughts, the Dolores who Williams remembers returns to haunt him. Broken and alone, he’s finally reached the end of the maze he was so desperate to locate.