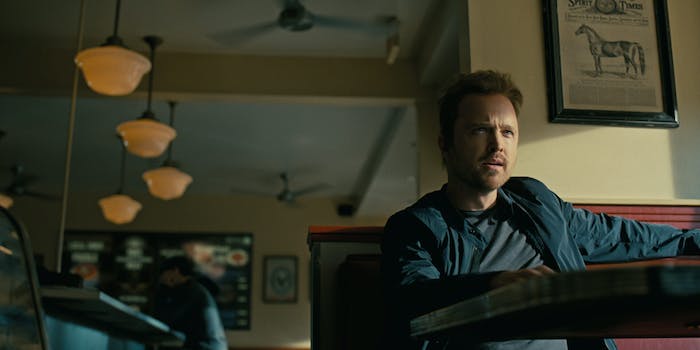 ‘Westworld’ episode 3 connects the threads between host and humanity

Caleb Nichols gets in over his head while Charlotte Hale struggles to maintain control.

This post includes spoilers for the latest episode of Westworld, “The Absence of Field.”

After a week spent back in the parks, Westworld is returning to the real world. But that doesn’t mean that the wheels still aren’t turning as the threads start to connect several unlikely characters together.

“The Absence of Field” takes its name from the famous Mark Strand poem “Keeping Things Whole,” which touches on feeling out of place in the world, even in their own skin. In the case of the unknown host who’s masquerading as Charlotte Hale, it’s literal, while for Caleb, it’s on a more personal level.

The man that, at least once, even Incite couldn’t predict

Caleb is clearly out of his element from the get-go. He’s made a point of staying under the radar, refusing to do personals on RI₵O or jobs that will get him noticed, but thanks to his decision to help an injured Dolores and get her on an ambulance, he’s now part of the RI₵O jobs; he realizes even before speaking to the cops that stopped the ambulance that they’ve been bought.

Dolores knows that his direct connection to her means that he’ll have to change his name and disappear, which he initially refuses to do. But soon enough, RI₵O puts out a job on him. Once he’s picked up for “questioning,” he refuses to tell the men holding him where Dolores is—in part because he has no idea where she is. The RI₵O guys don’t believe Caleb, so they resort to torture by screwing into the device located in the roof of his mouth (one he doesn’t use, his torturers note) and raising his adrenal rate to kill him.

George, a.k.a. Caleb’s robot colleague, senses his distress and tries to help him to no avail. But fortunately for Caleb, Dolores picks up on his lowered life expectancy via Incite and races off to save him.

Later, Dolores takes Caleb to an inconspicuous diner for some food, a diner that has a great deal of meaning to him. But of course, Dolores already knew that, and her insight goes beyond what data companies can track. She knows just about every aspect of Caleb’s life, such as the fact that his mother left him in that very diner when he was 8 years old and the transcript of the conversation he had with a server—a conversation that Rehoboam (which Incite is built off of) logged. And, as Dolores later reveals, Rehoboam even gives her an estimation on when Caleb will probably die.

It’s a Catch-22 for Caleb and, I suspect, so many of the humans in the real world who aren’t part of the one-percent of the one-percent. He’s frustrated with his dead-end job and tries to do better for himself. He’s told by a non-human voice that despite a strong application, he’s not a good fit but isn’t told how he can improve. According to a predictive algorithm—which takes factors like depression, his mother’s schizophrenia, and his knowledge of firearms into consideration—Caleb will likely kill himself in about 10 to 12 years. Because of his likely cause of death, he’s not seen as being worth any kind of investment. (Just a few decades before Westworld takes place, it’s possible that someone like Caleb would be just fine.)

Despite their differences, Dolores sees a kinship with Caleb, arguing that they’ve both been kept in cages. But there’s something even more intriguing for her. Although his code would never suggest it possible, he decided to protect Dolores, a woman he barely knew, instead of giving her up. So she offers him a new choice: He can disappear with as much money as he wants, or he can join Dolores’ revolution. But in the end, it’s not much of a choice.

The cold open, which takes place after Dolores prints out her own body (but before she does the same for Bernard), introduces us to a Charlotte in a state of confusion. (Although the real Charlotte Hale is dead, I’ll be referring to this host as Charlotte to avoid confusion; also, we don’t know which host she actually is yet.) She doesn’t understand why she can’t be herself and why she has to pretend to be someone who wants to harm to hosts.

She especially doesn’t understand why Dolores—who does get to wear her own skin—is bringing back Bernard after he tried to stop Dolores last season. As Dolores shows us, her recreation of Bernard (with a mix of Bernard and Arnold) is one of the five pearls she smuggled out of Westworld last season. Charlotte is one, Bernard is another—his pearl has a reddish tint, a mix of the black that indicates a host pearl and the red that indicates one containing human consciousness. Three are mysteries for now, although one of them ends up in a host printout of Martin Connells.

“Like I said, we all have our role to play,” Dolores says when pressed about it.

Dolores’ scheme to have Charlotte manipulate Delos from the inside while looking like Charlotte is a necessary evil: Dolores needs control of Delos to make more hosts, and to guarantee that, she needs Charlotte to maintain power because the world still doesn’t know that the real Charlotte is dead.

And Charlotte does her job with aplomb, devoting herself to stopping Serac—who doesn’t have any kind of online footprint, something that’s practically impossible in Westworld’s future—from taking control of Delos after he purchased the smaller shares that ultimately give him the most amount of control in the company and finding the mole within Delos who’s been smuggling data out of side players like Peter Abernathy, something the real Charlotte was doing last season.

The more Charlotte spends in the real Charlotte Hale’s world, the more she seems to withdraw or walk around almost as if she’s in zombie mode. She neglects the real Charlotte’s son Nathan, and when she does try to connect with him, he sees right through it. She slowly claws at herself in an effort to feel something real. She replays a garbled message on her phone over and over again in an attempt to figure out its message—or even purpose. She desperately clings to Dolores in any way she can, the person Charlotte knows best (and who knows Dolores the best), voicing fears that the real Charlotte is trying to take control of the host’s body.

It’s not until she watches a video recorded by the real Charlotte singing a song to Nathan that she seems to really connect with the woman she’s supposed to portray. She kills a man who was attempting to groom Nathan (and gives Nathan the man’s dog in the process), noting that “most people don’t want to see the predator on the side.”

When she watches the video meant for Nathan a second time, it has a much greater emotional impact on Charlotte. This time around, the musical code to connect her to an unknown number clicks, and when she asks to meet, the driverless car she’s in takes her straight to her source—Serac. In the span of only a few minutes, he reveals several things. One, that he has some of Delos’ guest data, but not all of it. Two, that the whole espionage plot to smuggle out that data was Charlotte’s. And three, that the key to unlocking it all is in the mind of Dolores Abernathy.

Charlotte asks for time to look for Dolores (who, coincidentally enough, is looking for Serac), but as Serac reminds her, she has very little of it to work with. And for a host who’s already in the midst of an identity crisis, it’s only a matter of time before everything comes to a head.