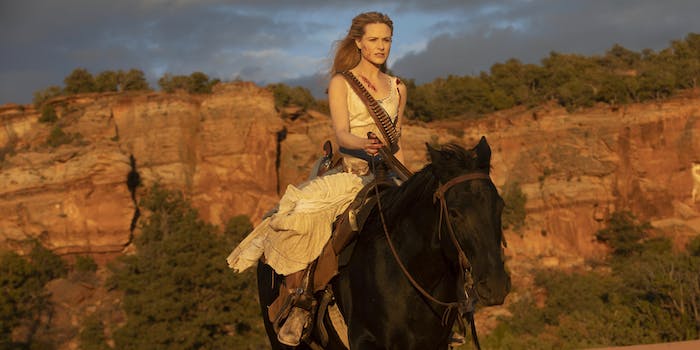 Westworld set itself a tall order leading into its season finale as the hosts and humans all made their way to the Valley Beyond and the Forge. While some of them got the answers—and the salvation—they were looking for, others became wrapped up in deeper mysteries and an even bigger fight in the future.

The post-credits scene revelation that William eventually becomes a host being tested for fidelity is only scratching the surface of what happened in the “The Passenger.” The episode, clocking in at 90 minutes, reveals more of the inner-workings of Delos and Westworld itself. Some reveals were an entire season in the making, but others appeared just as they were answered.

Does your mind feel as scrambled as Bernard’s made his own to be? Let us assist you.

For most of the season, Bernard—as presented in the timeline after he’s discovered on the beach—is confused. He can’t think straight or tell Strand, Charlotte, or anyone what’s going on. It was easy for us to contribute much of that to Bernard’s deteriorating mind in the wake of the gunshot wound to his head last season. And he was willing to give the humans the benefit of the doubt up until the moment he witnessed Charlotte Hale murder Elsie Hughes in cold blood. But for once, he was the orchestrator of his own plan rather than the puppet.

With the “assistance” of a version of Ford imagined by him, he set his plan into motion. He printed out a host body that looked like Charlotte Hale and placed Dolores’ mind inside of it. Dolores then killed Charlotte and took her place. Once Bernard realized what he had done, Charlotte’s role was revealed: the Charlotte we saw after Bernard woke up on the beach was never Charlotte. It was Dolores the entire time. He gave the hosts the advantage again, even if it meant bringing back someone with completely different motives and means he disagreed with.

Looking back, Charlotte’s actions are fascinating. She can fill in at the Mesa battle for Bernard because Dolores was there, too. She has different reactions, and to a well-trained eye, there may have even been something “off” about Charlotte. Which now makes sense because that was never Charlotte.

Upon arriving at the Forge, Dolores used the encryption key (in the form of Peter Abernathy’s mind) and invited Bernard to dive in with her. And at first, it looks like another trip down memory lane: They’re both witnesses to Jim Delos’ wrath upon his first visit to Westworld. But beyond those surface-level memories, it reveals a cynical and clinical view of humanity—and a powerful weapon for Dolores.

The Forge’s system takes the shape of Logan Delos—whose mind was never captured by Westworld—and he shows them just what they’re up against. Humans, he explained, are much simpler than anyone at Delos or the hosts thought; it only takes 10,247 lines of code to recreate Jim Delos. Like hosts, they’re caught in their own loop and follow their own code. And sometimes, no matter how many scenarios the system runs, some results never change. Jim Delos will always abandon Logan after the latter asks for help one last time. And as we saw at the end of the episode, William will always murder his daughter.

Dolores reads enough of the books to take in the information she needs, but she wants something more. To destroy humanity, yes, but to free the hosts beyond the Valley they’ve been promised; she sees that as a false hope. It aids her, but it’s also her undoing as Bernard shoots her down.

The other, other host hiding in plain sight

We’ve known since season 1 that Bernard has been a host hiding among his human peers, something that humans have only begun to become aware of. (Well, at least until their deaths.) But he isn’t the only one.

In an episode where Dolores switches bodies and William’s mind is eventually transferred into a host, the other reveal may have gone unnoticed. But the subtext is all there.

As Dolores (now in Charlotte’s host body) prepares to leave the park, she’s stopped by Ashley Stubbs, who’s been almost singularly focused on protecting the guests—and often clashing with Delos heads—all season. Their conversation is tense—and maybe he senses how she’s changed—but he essentially reveals to her that he’s a host as well. (Update: Showrunners have confirmed that Stubbs is a host.)

“You know, the old man himself hired me,” Stubbs said. “So many years ago I can barely remember it. But he was very clear about my role here. About who I was supposed to be loyal to. I guess you could call it my core drive. And this project the company started blurs the lines. You know? I’m just not sure who you’re supposed to be loyal to in a world like that. But what do I know? Guess I just stick to the role Ford gave me.”

Stubbs tells Dolores-as-Charlotte that he’s responsible for every host inside the park—stressing the word “inside”—and lets her go. But it leaves us with plenty of questions. How long has Stubbs realized he was a host? (And did he always know, or did he find out like Bernard?) What has he been doing with that information? What is his role in Westworld? And did anyone else know about it before this moment?

Dolores is in control to wipe out Delos security, kill Bernard for his efforts, and make her way out of the park. After two seasons, Dolores is free. But she’s got more than a few tricks up her sleeve.

She changed her mind about the Valley Beyond and uploaded Teddy there before moving its location. And then she smuggled five host minds out of the park—one is presumably in Charlotte’s body now that Dolores reprinted her old body again. What else she has is up in the air.

Dolores still wants to end humanity, and she knows that she ultimately needs Bernard’s help to do so. But it’s within Bernard’s nature to resist Dolores’ point of view and go against her at every step of the way. Dolores at least gives him enough tools to start somewhere.

After nearly two seasons of keeping Bernard and Dolores apart, it’ll be fascinating to see them butt heads in season 3.

The virtual reality of the Valley Beyond

Fortunately for Akecheta and the other hosts seeking the Door and the Valley Beyond, it was, in fact, a real place; he didn’t lead them astray. They just needed some assistance from Dolores and Bernard to get there.

It’s not a physical journey, either. Hosts make the choice to take that leap through the rift, and while their minds are uploaded into that new world, they leave their bodies behind. And whatever essence of them was once in their host bodies is now gone. (It explains why a third of the host bodies Delos discovered are “virgin,” or never used.) But as we saw, not everyone made it to the Valley Beyond.

Maeve’s daughter, the woman who replaced Maeve as her mother, Teddy, and Akecheta all ended up on the other side—with the latter finally reuniting with his lost love. But Maeve, Hector, Armistice, and Hanaryo all died in a battle caused by Clementine, who’s now a puppet being used by Delos. Maeve’s choice was intentional and echoed Lee Sizemore’s earlier sacrifice: She used her admin privilege abilities one last time to allow her daughter and Akecheta to escape into the Valley Beyond, creating a powerful image in the process.

But chances are, this isn’t the end for Maeve. She’s got Felix and Sylvester to salvage her, and once she’s booted back up her drive to find her daughter—and find that Valley Beyond—will likely be even greater.