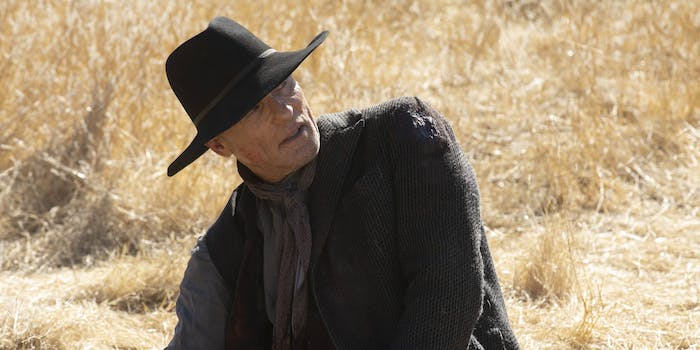 Major answers for the Man in Black.

Westworld ended its second season with plenty of twists, turns, and reveals, but it saved one of its biggest until after the credits rolled.

This isn’t the first time the show has utilized a post-credits scene after a season finale. It was brief and self-explanatory last time: Armistice survived the encounter with armed Delos forces and detached her own arm so she could fight even more of them. But it pales in comparison to the post-credits scene given to viewers at the end of “The Passenger” Sunday night. It’s ambitious and ambiguous. We’re left to question the nature of our reality, the reality of one of its characters, and take a long look at the show we’ve spent the past two seasons watching and dissecting.

Finding fidelity in the Man in Black

In the post-credits scene, we return to William. He’s heading down an elevator in the Forge, but he ends up on a different level than where Dolores and Bernard accessed Westworld’s data files. It looks vastly different. It’s untouched by the destruction wrought by Dolores. But then, a familiar figure appears.

It’s Emily, whose body we had seen placed among the dead by Delos as surviving guests were transported out of the park—yet standing there after William murdered her in the previous episode.

Emily leads him into another room and into the apartment designed and built for Jim Delos, where she begins to question him.

Emily: Do you know where you are, William?

William: In the park. In my fucking park.

Emily: And how long have you been here?

She prods him further, wanting to know what he hoped to find in the park.

“That no system can tell me who I am,” he responded. “That I have a fucking choice.”

“It’s been a long time, William—longer than we thought,” Emily tells him. What she’s looking for, she says, is fidelity. The setup, from the room they use to the questions Emily asks, is reminiscent of the interviews William had with his father-in-law.

And as Emily told him, it’s nowhere near the first time she’s had this conversation with him. (Although whether it’s equal to the 149 interviews he’s had with Jim Delos, we don’t yet know.)

William is a host—but he also isn’t

It makes sense, really, even if it’s not necessarily the most satisfying conclusion. For one, William had a superhuman ability to survive the multiple gunshot wounds he received in the park—just from season 2 alone. But that William is just incredibly lucky. According to co-showrunner Lisa Joy (who wrote “The Passenger” with Jonathan Nolan), the post-credits scene takes place in the “far, far future.” The William we see in the post-credits scene is now stuck in a loop long after the initial William first lived through it.

“We were designed to survive,” Dolores tells William earlier in the season 2 finale after he shoots her multiple times. “That’s why you built us.”

At one point, William was a living person. We have no reason to believe that he didn’t walk through Westworld 30 years ago, drive the members of the Delos family to madness like a virus (including leading his wife, Juliette, to suicide), and walk through the park as an older man. (There’s enough recognition from others around him to suggest that William lived his life among humans before this iteration of William walked the park.) And a version of William exists within the Forge itself: He’s being tested as Bernard walks by him.

Now, thanks to the post-credits scene, we’re left to question the nature of our own reality within the show. Was every iteration of an older William a host? That doesn’t appear to be the case.

As the Forge’s system—in the form of Logan Delos—explained in the case of Jim Delos, every version of him ended up at the moment where Jim turned his back on his son Logan. And as director Fred Toye told Vanity Fair, William’s moment was the one that led him to the Forge: the murder of Emily by his own hand.

“The truth is that a human is just a brief algorithm,” the Forge’s system explained. Every iteration of William leads him to kill his own daughter. He’s doomed to make that choice every single time.

So then what happened to William?

Prior to the revelation that William’s being tested for his own fidelity, we see him among the group of survivors. We see him as Ashley Stubbs (who is implied to be a host himself) observes his body, and his hand is still wounded.

Thanks to Insider’s exhaustive and informative timeline of Westworld, we know that there’s an 11-day gap between the events at the end of the season and the current timeline. And while we know a lot of what happened to Bernard within that time, we have no idea what William went through or how he ended up where he is now.

Emily tells William that he isn’t where he needs to be and toward the end of season 2, so the drive for human immortality still has a long way to go.

The good news for the internet sleuths is that Westworld season 3 is on its way. And although we might have to wait until 2020 for the next episode, we have plenty of time to figure out what we just saw.