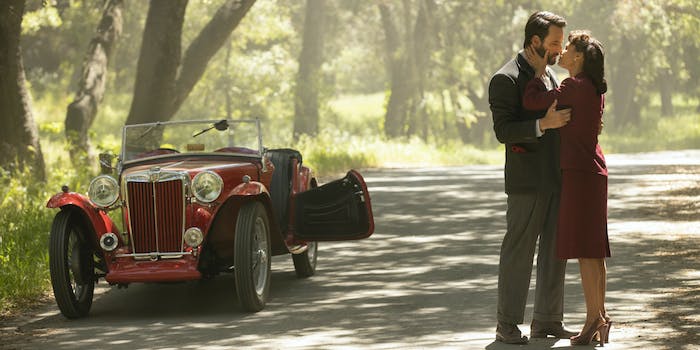 On ‘Westworld,’ a return to the parks offers a wealth of information

The nature of the hosts' reality is questioned more than ever.

This post includes spoilers for the latest episode of Westworld, “The Winter Line.”

Westworld loves playing with the nature of its own reality. We’ve seen the series toggle with several different timelines, several versions of a single character, and play around with whether a character is human or a host—or will at one point be both. But now the distinction becomes even foggier for one host while another tries to get to the bottom of another mystery.

While “Parce Domine” planted us into the real world, “The Winter Line” is largely in the far more familiar territory of Delos, Inc. Dolores (Evan Rachel Wood) is an unseen but constant threat while we still have no idea what William (Ed Harris) has been up to, but that doesn’t mean that there still aren’t dangers for our favorites. The episode balances two separate stories that circle one another but never quite meet.

The first is Maeve’s (Thandie Newton) attempt to escape her latest loop. When we last saw her last season, she was aiding hosts traveling to the Valley Beyond (including her daughter) before being gunned down. Now she’s in a Nazi-occupied Italian village with a new outfit, a new hairstyle, and a small gun in her hand. She may have escaped one park, but as last week’s post-credits scene revealed, she’s now in the middle of another.

Before the most recent episode of Westworld, we visited three of the six parks: Westworld, Shōgunworld, and The Raj. “The Winter Line” throws us right into Warworld while Bernard (Jeffrey Wright) and Ashley Stubbs (Luke Hemsworth) visit to Park 4’s labs hint at what the fifth park could be. (Could it be Medieval World, a.k.a. one of the worlds from the 1973 film?) Warworld has romance, espionage, spies, and with Nazis on the lookout for the person who stole important plans, a chance for guests to kill plenty of Nazis.

Its aesthetics are straight out of World War II, the kind of grand epic that someone like Lee Sizemore (Simon Quarterman) would romanticize (and secretly hate) and the super-wealthy would probably get a kick out of experiencing; it’s easier for them to envision themselves killing Nazi hosts than face the reality that some of them probably would’ve been in league with the Nazis to protect themselves.

Maeve is nothing if not adaptable. She once again easily speaks a language she didn’t expect to know and is paired with Hector (Rodrigo Santoro), who’s more than willing to get her out. Hector even whisks her away in a grand car, noting that he “wouldn’t dream of helping you escape in anything less than the style that you’re accustomed to.”

It easily leaves Maeve on shaky ground because she no longer has the power to control other hosts. But the bigger shock is that Hector doesn’t seem to know who Maeve is; when on the plane, he calls her Isabella. And she quickly realizes that his means of escape were all part of his new loop, which meant that she and Hector were never going to escape. As she later discovers, Hector not recognizing her is more of a feature, not a bug; Felix and Sylvester, the Delos techs she’s been aligned with for much of the series, also have no idea who she is once she’s brought into the lab for cleanup. But before she can kill herself for another reboot, Lee steps in to stop her.

We last saw Lee sacrifice himself after giving the speech he always wanted to say, so it’s a bit of a shock to see him mostly back to normal, save a cane he now uses to walk. He’s as snarky as ever, even calling Warworld “an artistic travesty” in the process. But he has other reasons for sticking Maeve in a world he despises: its proximity to the Forge.

Granted, Westworld’s park sometimes lacked subtlety, too. We catch our first glimpse of it after Bernard returns to the park he once controlled, visiting the now-abandoned places that held value to both him and Arnold that are now collecting dust. It’s in the old house where Dolores and Bernard were first created decades ago that Bernard discovers Stubbs, who shot himself but shows signs of life when Bernard shows up.

If there was any doubt that Stubbs was a host, a concept introduced at the end of season 2, Westworld quickly quashes that idea right out of the gate. Stubbs is, in fact, a host, one that was programmed to protect the hosts in the park and to cover Bernard’s tracks; once he had done that, to kill himself. Of course, Bernard fucked that up by coming back, and Stubbs is blunt enough to let him know that. Westworld, even at its best, can be quite dense, so it’s always great having someone like Stubbs offering moments of levity.

Bernard came back for a reason. He needs help and a way to stop Dolores. For him, that means getting Stubbs to help him and finding Maeve in the Delos lab, only one of which is successful. Maeve’s trip to the Forge, however, provides many more answers, albeit maybe not the ones she was looking for. Lee is much more inquisitive than usual, but then the chips start to show: He’s more sentimental and he credits Maeve for changing him. And then Maeve knows that Lee isn’t real, he didn’t survive, and he’s part of whatever prison she’s trapped in.

“Oh it’s a good script,” she says. “Even you believe it. They wouldn’t want you questioning the nature of your reality, so they made you believe just like they used to make us believe. But you’re not real. You’re not Lee Sizemore, just a copy of him.”

As Lee processes it, he starts to glitch, but Maeve is only just scratching the surface. Lee isn’t real, Felix and Sylvester aren’t real, and neither is her own reality. And Maeve? She’s not even in a Delos park. Bernard and Stubbs find her host body with her pearl missing, and an eventual scan in a Park 4 lab (which includes a tongue-in-cheek nod to fellow HBO show Game of Thrones along the way) doesn’t give them any more information about where she might be, and Bernard plugs in to find out if Dolores planted any flaws within his own code while getting flashes of events from last season. (Naturally, Stubbs is left to keep everyone else busy while he does this.)

Although Maeve has always been quick on her feet, here’s where she truly gets to shine. She delights in testing the limits of her own reality, and she openly questions why she’s being tested about what she knows. Soon enough, she figures out that thanks to human laziness, she can bust herself out of her simulation with an overload of plans placed into the pockets of every host in Warworld; she’s almost amused at how simple everything is. All it takes is a few swipes for Maeve to place her own consciousness into a Maintenance Drone, who can then grab her pearl and bust out of the real world facility she’s being held in. The aspect ratio changes when she does that, a clever visual cue that tells us she’s out of the simulation.

While Maeve is in a much different place than Bernard and Stubbs by episode’s end, their predicaments are fairly similar. Bernard, who plans to visit the people whose “books” Dolores targeted in the library (including Liam Dempsey Jr.) last season, programmed Stubbs to protect him at all costs. Stubbs complies, though he notes that he would’ve helped if Bernard had asked.

And then Maeve meets Serac (Vincent Cassel), the mysterious man who has control of the algorithm known as Rehoboam. He aims to create the future, but his future is in danger thanks to Dolores’ entrance into the real world. While the conversation always remains polite, Maeve isn’t interested in Serac’s war or the task he offers her to kill Dolores. But even she couldn’t see the limitations that Serac would place on her. She might be free in one sense, but she’s still at the mercy of humanity.