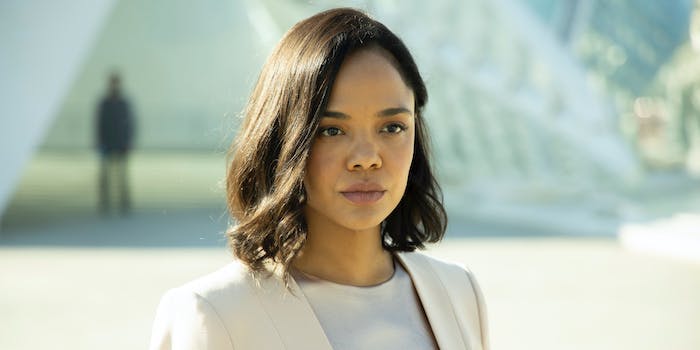 The third season branches out and zooms in.

For the past two seasons, Westworld has showcased the best and worst of its own mystery box elements. It’s highly cerebral, the perfect kind of series for a certain kind viewer who will spend hours diving into the most menial of codes displayed on a page, but for others, the mysteries within mysteries proved to be a confounding watch. By the end of season 2, when Dolores (Evan Rachel Wood) and Bernard (Jeffrey Wright) entered the real world as enemies who still can’t help but help each other on occasion, much of the fallout from the season’s events and the use of multiple timelines had us asking, “Is this now?”

RELEASE DATE: March 15, 2020
CREATORS: Jonathan Nolan and Lisa Joy
STREAMING: HBO
Dolores Abernathy and her allies start to wage a war against humanity from inside the world of the one percent while both new and familiar factions try to stop her.

For its part, Westworld season 3 takes a step back while refusing to budge on examining the moral quandaries of the forces in power. It’s a more streamlined version of Westworld, one that still embraces many of those mystery elements, especially as the show drops you into a world that, despite having already watched 20 episodes, we’re not very familiar with. Instead of multiple timelines, the cast of hosts and humans that inhabit Westworld has largely dwindled. But even as the new narratives play out, a few of the old bugs still remain.

In the first four episodes made available to critics, Westworld stakes its claim in the real world, a sleek and futuristic society that’s full of driverless cars, security that’s readable through a unique blood signature, and an ever-present connection to technology. At the very top of the food chain—the one percent of the one percent—lays the tech companies that have access to so much more data than any of us can imagine.

At one time, Delos—which had its own library with data on the 4 million guests who visited one of Delos’ theme parks—on was among them; it was valuable enough that Charlotte (Tessa Thompson) planned to smuggle out of the park within a host pearl. Now, its reputation has largely been tarnished, but that hasn’t stopped Charlotte (who lives on after her death as a host pretends to be her, Weekend at Bernie’s) from trying to revitalize it—at least when she’s not having crises of faith. And now Incite, a company that claims it will help introduce you to your best life but whose methods are often much eerier, comes into the picture with the kind of technology that makes Delos’ depth seem like child’s play.

Knowledge is power, and Dolores knows this better than most, so she makes herself a major player in that world as she tries to get her hands on more data, but those who have it aren’t so ready to give it up. “I need a competitive advantage,” Dolores says to one person she goes up against.

But Westworld has almost always focused on the super-wealthy; our time learning about the lives of regular Delos employees such as Elsie, Sylvester, and Felix, were, at best, limited. Season 3 introduces us to Caleb Nichols (Aaron Paul), a military veteran who works a dead-end job alongside a robot named George by day and does petty crime by night via an app that taunts you with passive-aggressive responses for not taking the risk. He’s been through a lot well before he crosses paths with Dolores, and Westworld isn’t subtle about demonstrating it.

TV shows tend to be a mixed bag when introducing major characters several seasons in—Lost’s Nikki and Paulo is the quintessential example of it just Not Working—but Paul’s vulnerability and exasperation as Caleb works. Early on, we see Caleb becomes increasingly exasperated as he repeatedly asks a nameless voice to tell him what he could do to make himself the right fit for a job—any job, really—after his application was turned down, but all the voice can do is assure him that despite a strong application, there’s nothing that’s a good fit for him. He’s just interesting enough for him to be of interest to Dolores, showing her that sometimes, humans and hosts can have a common enemy in an overarching society that is not designed for them.

Even when it gets too caught up in the weeds (and it gets caught up in the weeds fairly often), it’s fascinating to see it play out. The battles and fights that play out aren’t just physical and with guns and swords—though there are plenty of both. The battle is also an intellectual one. We see it especially once we leave Dolores and Charlotte’s worldview and catch up with Bernard on the outskirts and Maeve (Thandie Newton) in an arena that’s reminiscent of a romanticized World War II epic. Whenever we cut to them, Westworld feels like a very different show.

Does one work better than the other? It probably depends on which story or characters interest you more. One is familiar and features characters who almost feel like they’re in the midst of a loop: The setting and characters involved might look different (and this is where at least one intriguing new face comes into play), but the scene feels very familiar. The other is much grander in scope and newer with a greater risk of failing.

Those stories don’t intertwine much in the early episodes, but when they do, they create some of the season’s most gripping sequences, and the fourth episode leaves some very interesting quandaries and uncertainties in its wake. Then again, when everything seems to be falling apart in our world, it’s almost comforting to know that at least in Westworld, the robot revolution is still right on schedule.