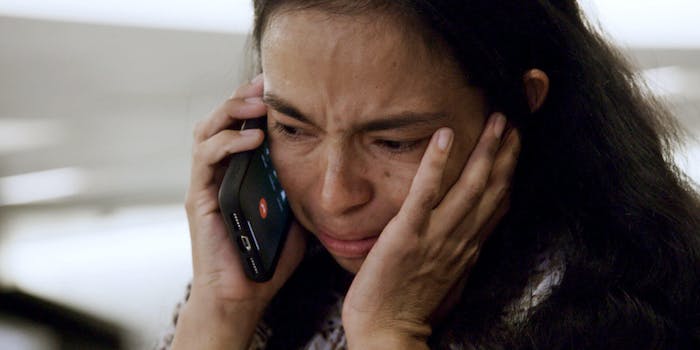 ‘Torn Apart: Separated at the Border’ is a harrowing document of survival

'Torn Apart' nails down realities of the Trump administration's version of immigration policy, which has made family separation a central tenet.

The exact definition of the phrase “tear apart” is “to damage or destroy something completely by breaking it into pieces.” HBO’s harrowing and compact new Torn Apart: Separated at the Border further elucidates the many contexts of the phrase, including the emotional and psychological toll it takes on two families. The 40-minute documentary is a harrowing account of survival for two families who make long treks toward some semblance of freedom, and face even longer odds at the border to the United States—the supposed beacon of freedom.

Torn Apart: Separated at the Border

Torn Apart starts in earnest with a caption that reads, “Nearly 3,000 families were separated while seeking asylum at the U.S. border.” Its primary subjects, Maria and Vilma, fled their home countries of Honduras and Guatemala, respectively, in 2018 to seek asylum in the United States. The mothers made the arduous journey with the children they’ve turned over their lives for, only to be separated from them.

Each of them ends up in places that are unfriendly to asylum seekers. After Vilma fled Guatemala, where her husband abused her, immigration separated her from her U.S.-born child, Yeisvi, and placed the little girl in Arizona foster care. They sent Maria’s 10-year-old boy, Alex, from the border all the way to Cayuga Migrant Center in New York City. Both parents were eventually reunited with their children. But it feels this was made possible, in part, because of the power of the rolling camera.

Torn Apart nails down the bleak realities of the Trump administration’s version of immigration policy, which has made family separation a central tenet. It appeared that if any family could be separated and detained (or moved without consequence)—for any period of time, via any manipulation of federal law—they would be. More than 2,000 children were taken from their parents in 2018, with many still separated despite a court ruling that requires the Trump administration to take responsibility for all the families it separated.

Directed by Academy Award winner Ellen Goosenberg Kent,Torn Apart premieres a week after Netflix’s Living Undocumented, a series focused on the Trump administration’s “zero tolerance” policy on locating undocumented immigrants for deportation no matter how long they’ve lived in the country. Needless to say, separations continue to be a major issue. In July, the ACLU reported that “more than 900 parents and children—including babies—have been separated since the court granted a nationwide injunction.”

Torn Apart: Separated at the Border ultimately stretches across two equally chilling portions. It thoroughly documents the families’ reception and often inhumane treatment at the U.S. border. The other critical piece does not always receive enough attention: the violent, poverty-stricken conditions from which these two families, and many others, have fled. Kent punctuates this notion with a quote at the start of the film, from Somali-British poet Warsan Shire: “No one leaves home unless home is the mouth of a shark.”