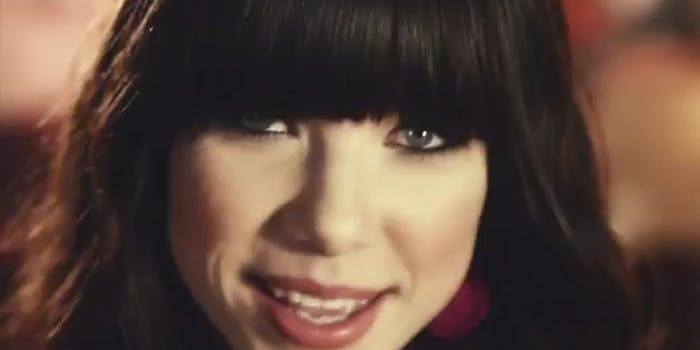 The Hater: The definitive collection of “Call Me Maybe” parodies is here

"Call Me Maybe" is the newest, hottest meme. At first, Jordan hated it, but now he's coping.

These “Call Me Maybe” parodies and remixes need to stop. I hate watching them, my ears hate listening to them—and my damn head is about to fall off from shaking it so much.

It all makes me very unhappy for many reasons. It’s annoying watching people jump onto a trend that should’ve stopped when the Today show killed it. I’m over seeing people share video of their college’s stupid baseball/rowing/square-dancing team jostle their arms to it on Facebook. (Whenever I see one, I assume it’s probably a club team that’s yearning for attention since no one gives a shit about club sports.)

And the worst part of these parodies is further realizing that the jaunty violin beat in the beginning of the song is, in fact, a keyboard. We killed art education in schools, and this is what we’ve had to resort to—even in Canada.

But since acceptance is the key to happiness, it’s time to give in and pick up Carly Rae Jepsen’s call. Of course, when the key is sung out-of-tune and accompanied by some very disturbing dance moves, it makes acceptance much more difficult. But in the end, it will be worth it.

So by the powers vested in me—along with access to a free a blogging platform—I am announcing the creation of Call Me Mayblr. A Tumblr whose sole purpose is to chronicle every parody that’s worth chronicling. All the Mayblr that’s fit to Tumblr. All the Carly Rae fit to Jepsen. Whatever.

Since the video was posted to YouTube on March 1, it has racked up 95 million views. It seems to have spawned double that amount in parodies. What started off as Justin Bieber and friends doing sepia-toned Biebery things, then turned into Katy Perry, the Harvard Baseball team, and—for fuck’s sake—Donald Trump poisoning YouTube with their own versions as well.

Some are actually kinda good, while others are really terrible. But they’re all a bit redeeming since they share a song that you just can not simply hate. I mean, the Maneater newspaper, which is *the* student voice of University of Missouri, didn’t label the song “musical herpes” for no reason. You’re just itching to get it out of your ears and no amount of Valtrex can stop it.

To be absolutely clear, I am not just taking any parody that moves its lips to some of the words at me. This is a carefully curated list, and I find myself with a tougher selection process than Jepsen trying to pick out a sufficiently dark eye shadow (Nehru? Carbon? Black Tied? Which one?!?). So I’ve made the following rules to guide the admissions process.

No more sports teams. Sorry, Texas State baseball team, but the Harvard bros did that “we’re so bored in a van” act first. And they did it better. So that trend is over. That goes for all of you, Olympic College softball (where?), University of North Carolina club (!!!) baseball, and Ellsworth Community College (that’s not a real place).

No mean-spirited parodies. No, you’re not ruining this sugary treat for me with your weird Hunger Games mash-ups or whatever the shit this parody is. This song is the equivalent for me of eating Ben and Jerry’s chocolate brownie frozen yogurt while catching up on my USA summer shows, which I enjoy way too much of (have you seen Suits? So good!). This song is that, and nothing you haters can do to stop it.

No dumb parodies, either. This is one about Tom Brady is dumb, this parody about being someone’s baby is creepy, and no videos will be posted from girls who call themselves “beliebers.” These are disqualified on the grounds that you are all awful human beings who need to just stop it.

So if your video doesn’t fall into one of those three rigid, clear-cut categories, welcome to your place on the Call Me Mayblr. I have to begin to accept that this meme will not die, and the blog is just my very public and cathartic coping mechanism. So, email me (maybe! get it?) at [email protected] with the parodies you think I should post.