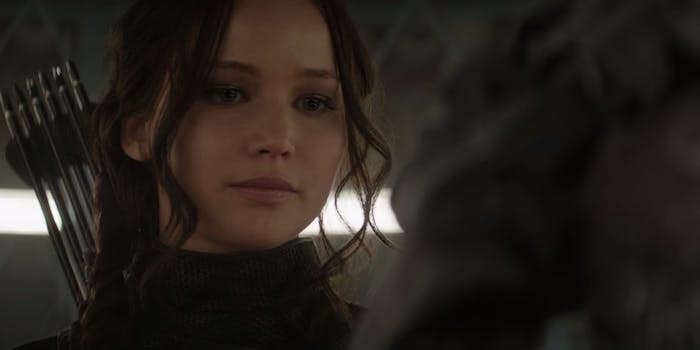 The Harry Potter Alliance is using the release of The Hunger Games: Mockingjay Part 1 to bring attention to a very relevant issue—income inequality.

The Hunger Games books and movies are all about the dangers of a widening class divide, building up to an all-out revolution. Using the hashtag #MyHungerGames, the Harry Potter Alliance is encouraging people to share their own stories about how in the real world, just as in the world of the Hunger Games, the odds are not always in our favor.

“We want to hear your stories,” the HPA posted on its Tumblr account. “The daily realities, the struggles, and the triumphs big and small. The ways race, gender, sexual orientation, bodily status, familial origin, and more intersect and inform how you’re treated. Economic inequality manifests itself in our daily lives and yet even alluding to it is frowned upon.

I grew up on food stamps & still have to have convos w people who argue that feeding people isn’t worthy of our time & money. #MyHungerGames

#MyHungerGames Living at home to help support my family, but avoiding the subject to avoid the “moocher millennial” judgement.

It’s not hard to make a connection between the popularity of the Hunger Games franchise, and the social inequality and rising debts experienced by its target audience. The heroine is a teenager who is constantly exploited by adults on all sides, and who is viewed simultaneously as entertainment and as free labor. Most millennials may not be as proficient with a bow and arrow, but Katniss Everdeen is still incredibly relatable on an allegorical level.

#MyHungerGames can tell us a lot about how people engage with the Hunger Games franchise, even if they’re not fans. Rather than being another young adult story about a supernatural quest or romance, it’s explicitly political—albeit marketed with a combination ofslick propaganda films and bizarrely inappropriate product tie-ins like Hunger Games makeup and Subway sandwiches.

#MyHungerGames We sometimes skip meals so our children can eat

my daughter has two jobs and cannot afford to live on her own. #myhungergames

The HPA now has a nine-year history of charity work and engagement with social justice causes, bringing fans together to fight for issues like LGBT rights and immigration reform. It’s not enormously well-known outside of Harry Potter fandom, but the spread of #MyHungerGames is proof that it’s reaching beyond its original scope.

While Lionsgate Films uses similar social media tactics to get people to buy more movie tickets, the HPA has started Odds In Our Favor. This site includes resources to help stay informed about tackling income inequality, as well as how to spread awareness of the issue. It’s also looking to recruit an “elite team of activists ready to help hack the Hunger Games narrative.”

“No prior revolutionary experience necessary,” apparently.