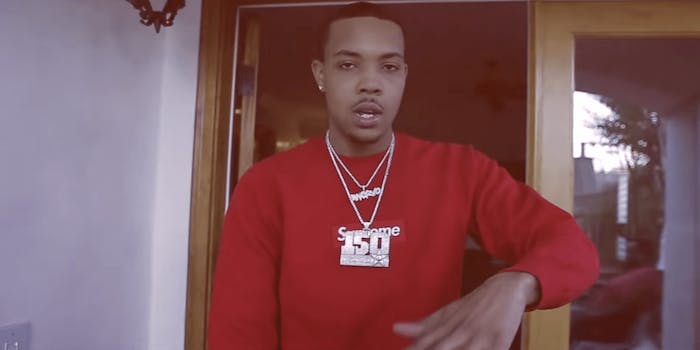 Ariana Fletcher put ex-boyfriend and rapper G Herbo on blast in a now-deleted Instagram post, where she accused him of having herpes, among other claims.

Fletcher—who is also the mother of Herbo’s 18-month-old son, Yosohn—blasted the Chicago native for allowing his new girlfriend, Taina Williams, to spend time with their child. Fletcher refers to Williams as a “hoe” and minces no words in her explosive accusations against Herbo.

The couple are no strangers to controversy. The Humble Beast rapper was arrested for battery in April after Fletcher alleged he “kicked my door down to get in my house” and “beat the fuck out of me in front of my son” via Instagram. Herbo was released one week later and, on Instagram Live, accused Fletcher of stealing jewelry from his mother’s house, which he apparently went to retrieve.

Jewelry yet again played a part in the latest round of drama for the former couple. Fletcher’s rant arrived after Herbo recently celebrated his 24th birthday with Williams, who gifted him a chain with a pendant holding a picture of his deceased grandmother. The gesture moved Herbo to tears.

G Herbo started tearing up after his girlfriend gifted him a chain with a picture of his grandma on it 🙏🏽 pic.twitter.com/KlfIyL29Yi

HEARING MY GRANNY VOICE IN THIS VIDEO MADE ME THINK ABOUT ALL KINDS OF OTHER SHIT THAT MAKE ME APPRECIATE MY LIFE.. LOL I AINT GONE SAY TOO MUCH MAN JUST HAPPY 24th BIRTHDAY TO MYSELF.. IF YOU CAME WHERE I CAME FROM YOU A PROLLY LOOK @ LIFE LIKE THIS TOO😎 pic.twitter.com/xz3NzfjgtN

After the celebration, Fletcher was apparently made aware of a video posted on social media that showed Herbo and Williams spending time with Yosohn. Fletcher claims that she and Herbo agreed to keep the child away from Williams for the foreseeable future.

In the deleted message, widely screenshot by fans, Fletcher elected to bypass diplomacy and went nuclear with a wide range of claims. She clearly didn’t appreciate Williams’ birthday gift to the father of her son.

NOW IM TAKING IT ALL THE WAY THERE. I try to be a cool ass baby mama, let you get my son even tho you don’t ever even get him foreal for whatever reason. I helped you get your cases dropped so you wouldn’t go to jail. I be being so cool with you and you really done pushed me past my mf limit now, MY SON BITCH? IS YOU ON DOPE? Cause when I just checked you and this bitch the other day y’all swore that wasn’t my baby but this CLEAR AS FUCKING DAY MY SON! You dumb broke crybaby bitch. I asked you not to have my son around this lame ass hoe and yo hoe ass agreed and said you and her know better ain’t no disrespecting me when it come to my son.

Fletcher went on to claim that Herbo has herpes. Herpes is a fairly common infection for which a variety of treatments exists, but to hear Fletcher tell it, Williams should be worried for her life.

“You got this hoe risking her life for you, you gone end up giving her that shit and ain’t gone know wtf to do,” Fletcher wrote at the end of her post. “Why you sat yo leaching ass on that video talking about ‘g herpo’ like it was so funny, when you wake up and your pussy look like star crunch we gone see how funny it is then.”

Needless to say, Twitter had thoughts about Fletcher’s furious post. Some took Herbo’s side and accused Fletcher of starting needless drama because she didn’t want to see him happy.

Some chalked it up to a double standard, noting that G Herbo was criticized of “giving up” on Fletcher—even though singer Ciara received praise when she broke up with Future and began dating her now-husband, Seahawks quarterback Russell Wilson.

Ciara left Future for Russ and got love.

G Herbo move on from Ari and get called ain’t shit for “giving up on her.”

Somebody make it make sense.

Others still simply thought Fletcher’s rant was hilarious. Time for her to drop a “G Herpo” diss track?