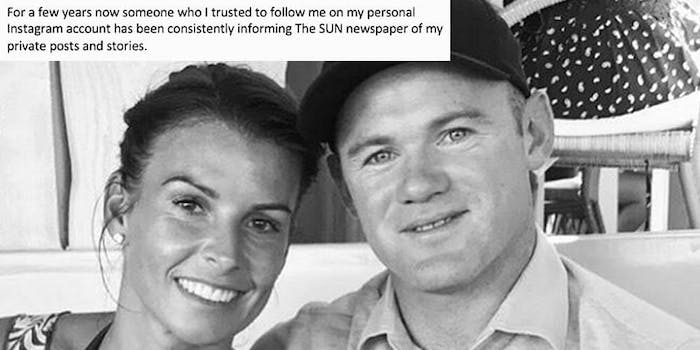 It appears as though there is some high-profile drama afoot across the pond!

First off, for those uninitiated, Coleen Rooney is a British television personality and the wife of professional footballer Wayne Rooney. Rebekah Vardy is a former nightclub promoter and wife of Premier League footballer Jamie Vardy. They are two of the most high-profile WAG (wife and girlfriend) friends who have shared the spotlight together for years.

That is, until Rooney exposed Vardy as an alleged no-good, dirty-rotten snitch.

On Wednesday, the 33-year-old mother of four posted a lengthy statement to her social media accounts, accusing Vardy of selling her out by leaking her private Instagram posts to tabloids. Such an accusation would be a bombshell as it is, but oh—Rooney brought receipts.

“This has been a burden in my life for a few years now and finally I have got to the bottom of it,” she wrote on Twitter, accompanied by a screenshot of a note detailing the way she ferreted out the mole. “For a few years now someone who I trusted to follow me on my personal Instagram account has been consistently informing The Sun newspaper of my private posts and stories.”

She then proceeded to explain in deliciously drawn-out detail that for reasons that are yet unclear, Rooney suspected Vardy of shenanigans. So, she set a trap for her frenemy by posting Instagram stories that were blocked to everyone except for one account.

This has been a burden in my life for a few years now and finally I have got to the bottom of it…… pic.twitter.com/0YqJAoXuK1

For five months—five months!—Rooney conducted her sting operation. And one might think with irrefutable evidence such as this, Vardy would be forced to fess up and grovel for an apology.

Yes, one might think that. But to do so would be extremely underestimating the wherewithal of high British society.

Within a half an hour of Rooney’s post, Vardy fired back with her own statement, essentially insinuating that… her account was hacked?

“If you thought this was happening you could have told me & I could have changed my passwords to see if it stopped,” she wrote. “Over the years various people have had access to my insta & just this week I found I was following people I didn’t know and have never followed myself.”

“I liked you a lot Coleen,” she continued, adding that she was so upset that Rooney had chosen to call her out like this, especially being that she’s “heavily pregnant.”

Unsurprisingly most people are not exactly buying Vardy’s story, and are instead applauding Rooney for her crack detective work. Within hours, the hilariously tongue-in-cheek hashtag #WagathaChristie began trending on Twitter.

I don’t know who came up with it originally but summarising the Coleen Rooney / Rebekah Vardy saga with the hashtag #WAGathaChristie is a stroke of genius worthy of a knighthood pic.twitter.com/pXQCY51BsQ

"This has been a burden in my life for a few years now and finally I have got to the bottom of it…."#WAGathaChristie pic.twitter.com/rqTU2u08On

We, as a society, deserve the #WagathaChristie scandal, I’m so happy for us

The story and detective skills were already astounding but the hashtag #wagathachristie is phenomenal. pic.twitter.com/laV81MNBLh

Whether Coleen Rooney and Rebekah Vardy are eventually able to repair their relationship remains to be seen. But friends, that is how you deal with a troll, and evidently a heavily pregnant one at that.