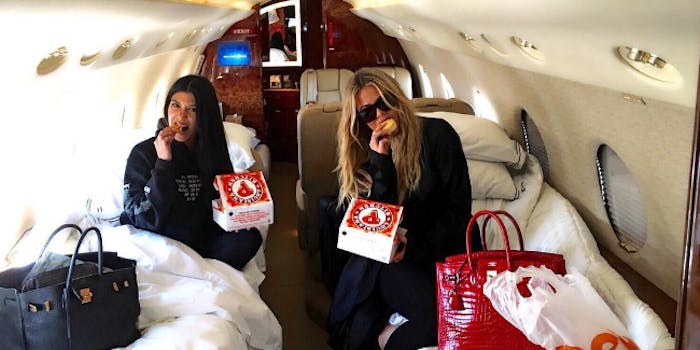 Sponsored posts are a way of life for a lot of famous people.

Just last month, Cougar Town and Freaks and Geeks alum Busy Phillips revealed that she makes more money from Instagram ads than from acting. But the way those sponsored posts are worded is extremely important to the government’s Federal Trade Commission (FTC). In April, the organization announced it had sent letters to celebs and “influencers” who had been treading too fine a line with their captions.

Women’s Wear Daily was able to track down the receipts this week, and apparently 90 letters were sent to 45 celebrities, as well as their agents and the brands they were publicizing in the posts. Sean Combs, Naomi Campbell, Sofia Vergara, Heidi Klum, Victoria Beckham, Allan Iverson, Lindsay Lohan, Jennifer Lopez, and Akon all received letters. Plus Adidas, Chanel, Cabela’s, Johnson & Johnson, Eos, and Puma.

It seems trivial, but when you consider which photos the FTC singled out, like this 2016 Instagram of Kourtney Kardashian eating Popeye’s on a private jet…

Popeyes on the PJ. #cheatday

…things become clearer. Was that post sponsored? Because if so, the caption is pretty vague.

Typically, a gesture like adding #ad or #spon somewhere in the caption is enough to calm them down. But when it comes to people’s backlogs, logistics get trickier. Do you go back in and update every caption? For the time being it appears the government’s answer is, “Yes.”