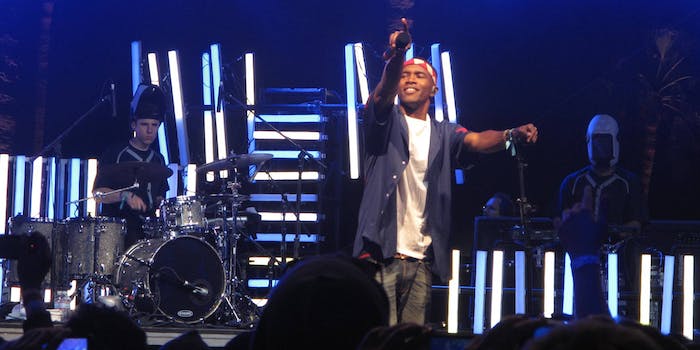 We'll have to wait even longer.

Frank Ocean fans have been waiting for years for a new album since his Grammy-winning Channel Orange debuted in 2012, and after a mysterious livestream appeared online earlier this week it seemed like we would finally be able to listen to his followup, Boys Don’t Cry. (Apple Music even announced it had the exclusive.)

But midnight came and went, with no album in sight. Again. Some fans feared this would happen—the New York Times even doubted it might happen, noting in its exclusive that “Given the number of delays the album has already had, it seems possible that Mr. Ocean could decide to put off the release beyond Friday”—but we held out hope anyway. We were, for the time being, duped once again. We’re all the Charlie Brown in this scenario, and Ocean’s Lucy Van Pelt will always pull away that football—that is to say, the album he said he’d release.

We did, however, get a couple of fitting Snapchat filters so we could collectively commiserate about the lack of Boys Don’t Cry in our lives.

The filters are commentary about the running joke that Ocean’s album will never arrive just as much as it’s acknowledgment of the event itself. One of them even features a skeleton waiting for Boys Don’t Cry because we might all be dead by the time it happens.

But for fans, it was another broken promise—and another chance to meme the hell out of his missed deadline.

Forget the music at this point. I want the Frank Ocean album to drop so the Frank ocean jokes can stop.

Apple: Hey Frank have you sent the link of the album yet?

When #FrankOcean lies and plays with your feelings more than your ex did. #boysdontcry pic.twitter.com/Tum9oMZqzC

Ocean, of course, doesn’t owe his fans anything. So for now, we’ll patiently wait for what we can only assume is perfection—even if we’re just mere skeletons by the time it comes out.

When Frank Ocean's album drops and i press play for the first time pic.twitter.com/o5iG07vJTG

Maybe Ocean still needed time to perfect Boys Don’t Cry. After all, even Kanye West withheld an album’s release so he could tweak it at the last minute (and again after its release).

But more importantly, we’ve still got more than 12 hours until Aug. 5 is over. Maybe—just maybe—we’ll get it before the end of the day. We’ll make it up that hill.