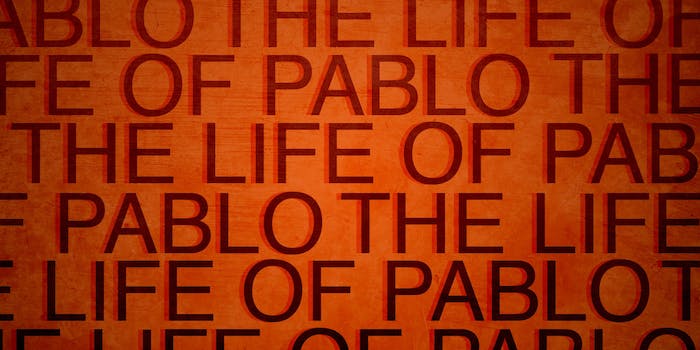 Kanye West changed ‘Life of Pablo’ again, and you have to hear its new song

'The Life of Pablo' is slowly becoming a choose-your-own-adventure album.

Four months after its release, Kanye West‘s The Life of Pablo has changed its ending like a choose-your-own-adventure book.

West’s seventh solo album briefly went dark on streaming services like Apple Music and Tidal overnight. When the album reappeared, a 20th, album-closing song, “Saint Pablo,” was tacked on. For now, the Spotify version retains “Fade” as its closing argument.

As for “Saint Pablo,” it appears to be a song that West debuted in February at a Los Angeles night club. Featuring British crooner Sampha, and co-written by Jay Z, per the Tidal credits, “Saint Pablo” is a smooth-knocking, piano-accented gem bursting with chest-thump raps. Gun shots are sampled for optimum messiah-complex paranoia, and West’s ability to speak in uncomfortable truths shines in lines like “most black men couldn’t balance a checkbook, but buy a new car talking ’bout ‘how my neck look?'”

As art, The Life of Pablo has stayed in our earbuds through three seasons because it’s emerged as a thrilling RSS feed for dedicated fans.