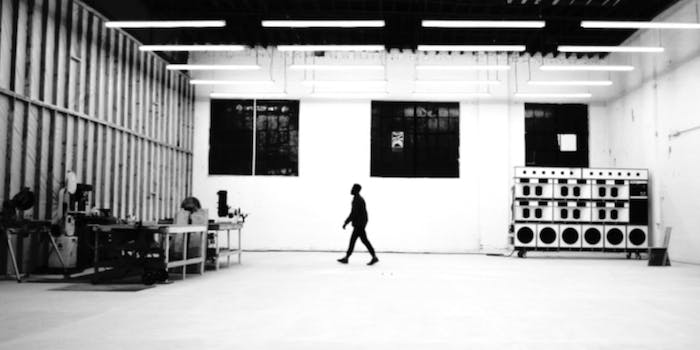 Could this be the new album at last?

Four years later, Frank Ocean is finally coming out of the woodwork. Literally.

Monday morning, the R&B star began a mysterious livestream on his website. So far, we’ve been treated to Ocean apparently using power tools to build… something in a warehouse. (There was one particularly arresting 10 minutes of swelling orchestral music; about 10 minutes later a neat flurry of synths.)

Ocean has not released a new album since 2012’s Grammy-winning Channel Orange. In recent years, he’s made a habit of promising imminent work, then standing pat as the grains of time pass. Last month, he broke another such promise. At least this time, there is an Apple Music logo on-screen.

You can watch the stream here. (Note: You’ll need to use Safari to watch.)

The stunt quickly became a national Twitter trending topic, as nervous fans have begun venting their anxieties over this damn thing.

If the 28-year-old born Christopher Edwin Breaux wasn’t so dynamic and captivating as a singer, we probably would have opened up another tab by now. Stand by.

Update 4:19pm CT: The New York Times is reporting that Ocean’s newest album, Boys Don’t Cry, will be released Friday exclusively on Apple Music. Ocean also reportedly will release a video along with a printed publication that will be available at Apple stores.

The Times also reported that Boys Don’t Cry will be available solely on Apple for two weeks before it’s allowed to make its way out to the rest of the world.