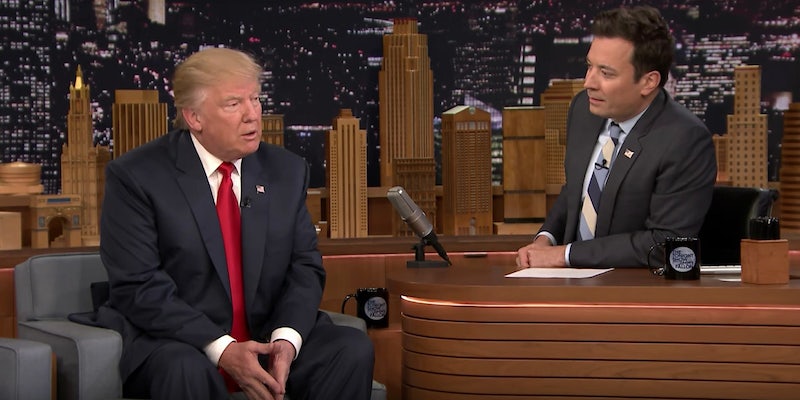 'Looking back, I would do it differently.'

Jimmy Fallon’s infamous 2016 Tonight Show interview with Donald Trump has been blamed for everything from normalizing Trump enough to get him elected to his declining ratings. But in another reflection on that moment, Fallon admits he screwed up.

In an interview for Awards Chatter, a podcast made by the Hollywood Reporter, Fallon expressed regret about ruffling Trump’s hair on his show.

“I’m sorry. I don’t want to make anyone angry—I never do and I never will,” he said. “It’s all in the fun of the show. I made a mistake. I’m sorry if I made anyone mad. And, looking back, I would do it differently.”

The hair ruffling, which NBC posted to YouTube before the episode aired (but has since been taken down), drew almost instant ire from journalists and viewers alike. Some blamed Fallon personally for normalizing Trump at that moment—and later getting him elected—because of that interview; it was a factor with at least one voter. In the following months, Fallon tried to downplay the amount of influence he may have had over the election, with Seth Meyers stepping in and saying that he should be blamed for Trump getting elected.

Earlier acknowledgments of the Trump interview by Fallon addressed his critics’ issues, but he also spoke about how he didn’t radically change his show because of it, noting that it wasn’t like him. But even then, some thought it wasn’t enough as Fallon was attacked for the interview pretty much any time he popped up back in the news. It began to affect him and his staff, noting that it “just got bigger and out of control” as other comedians started to make fun of him for the gaffe, leading him to check out of Twitter.

Fallon described the period as a “down time” that was “tough for morale.” Describing the effects of what he called a “gang-mentality,” Fallon said, “You go, ‘Alright, we get it. I heard you. You made me feel bad. So now what? Are you happy? I’m depressed. Do you want to push me more? What do you want me to do? You want me to kill myself? What would make you happy? Get over it.'”

Speaking about his critics, he wants them to view his entire body of work, not just that interview before insulting him and calling him evil.

And true, Fallon has gotten more political, in his own way, since the Trump interview, which included speaking out against white supremacy and joining the Parkland students to march for gun control. But even with this most recent interview, some might see his latest attempt to apologize and express regret as “too little, too late” in the wake of Trump’s recent family separation policies.