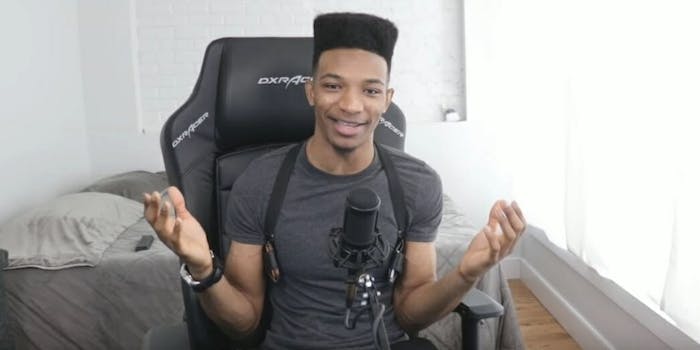 The streaming star died by apparent suicide this week.

The final video that Etika uploaded to YouTube before he died by suicide has been taken down for violating its policies on self-harm. Though there has been an outcry from hundreds of thousands of people after the YouTuber’s deceased body was found on Tuesday that the site should restore his last words to the community and his previously deleted channel, the site’s decision is most likely final.

After a Daily Dot inquiry, YouTube pointed to this tweet as its official statement on the matter.

We mourn the loss of Etika, a beloved member of our gaming creator community. All of us at YouTube are sending condolences to his loved ones and fans.

“We mourn the loss of Etika, a beloved member of our gaming creator community,” the tweet read. “All of us at YouTube are sending condolences to his loved ones and fans.”

YouTube also provided the phone number for the National Suicide Prevention Hotline for people who might need help.

If you or someone you care about is struggling, please know you are not alone. The National Suicide Prevention Lifeline is available at 1-800-273-8255 in the U.S. or find support worldwide at https://t.co/r2jD601Wgj

After the New York Police Department announced Tuesday that Etika—the 29-year-old whose real name was Daniel Desmond Amofah—had been found dead, some in the YouTube community asked for Etika’s last video to be restored. In that video, which was uploaded at midnight last Thursday and titled “I’m sorry,” Etika filmed himself walking around the streets of New York and insinuated that he was going to end his life and said the world would be better off without him.

“I’m sorry for leaving such a stained legacy,” he said in the video. “I hope that my story maybe helps to make YouTube a better place in the future where people know boundaries and limits and how far things should go. In an attempt to be edgy, I fucked up my entire life.”

In his video description, Etika wrote, “God… I’m so sorry I hurt you all so badly. I’m so sorry I betrayed you all. I mislead [sic] so many of you, I manipulated, I lied, I shifted blame… I don’t know what awaits me on the other side, but I’m ready to face it. As far as we know, there is no life after death. My time ends now, but if there is a way for me too, I’ll send you all as many blessings as I can from the other side.”

But that content is gone now, because, according to YouTube, videos that express ideation of suicide are removed from the site. Though YouTube said it allows for a discussion of mental health issues on its videos, it can’t allow content that actually promotes or promises suicide. That’s why Etika’s final video was pulled.

Some, though, want that video and his previously deleted channel to be allowed on the site again (his TR1Iceman channel has 134,000 subscribers, but his previous channel was terminated last year after he uploaded pornography to the site).

YouTube should restore Etika's channel so that everyone old and new can experience his greatness. Etika's legacy will live on. https://t.co/7erISLC1bd#JOYCONBOYZFOREVER

There’s also a Change.org petition signed by more than 365,000 people in less than 24 hours demanding that YouTube restore his channel.

“Desmond ‘Etika’ Amofah was a legendary YouTube streamer/entertainer, he pioneered YouTube Gaming and put the platform on the map with his insanely entertaining streams and loyal fan base,” wrote petitioner Luke Finnegan. “He was loyal to YouTube Gaming from the beginning. We the YouTube community and the Joycon Boyz, demand that his YouTube channel be reinstated so his legacy can be archived. Years of memories are gone due to his misconduct of a few uploads, and we think someone who has done so much for the YouTube platform should be allowed to have his greatest moments archived on YouTube forever.”

Etika originally sent his fans into a panic in April when he tweeted about suicide. He later was criticized for tweeting anti-Semitic and homophobic messages. Last month, Etika, in an interview with YouTube gossip channel Drama Alert, said he wanted to “purge all life.” A day later, Etika was detained after fighting with a police officer.

Now that he’s gone, though, Finnegan is asking YouTube to change its mind about his channel.

He wrote, “Please consider, think about how much he has done for you YouTube, think about all the years of his life he poured into his channel, and restore those memories.”