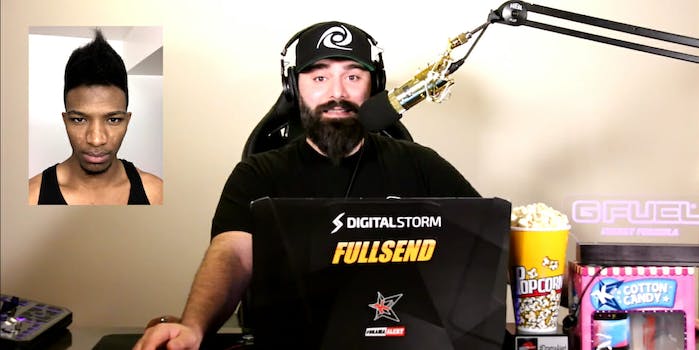 A Monday interview that gossip vlogger Keemstar conducted with Twitch streamer Etika was doomed from the start: “Hey guys, what’s going on it’s me, the antichrist. I’ve come to purge the planet of all human life,” he said.

The streamer, whose real name is Daniel Desmond Amofah, is by no means a stranger to controversy. Over the past several weeks, Etika has been displaying his struggle for all to see. A few weeks ago, he frightened fans with several suicidal tweets. Following that, he streamed his own police detainment to Instagram Live. He has also been known to tweet anti-Semitic and homophobic messages.

as pointed out, not arrested, detained is a better word. what happened to just yelling about smash bros man

In his interview with Keemstar, Etika revealed that he “will be dropping missiles very very soon on every single human being.” Keemstar, whose real name is Daniel Keem, appeared visibly uncomfortable but proceeded with the interview. “Death means nothing,” Etika continued. “Why are you all so scared of death for?”

Etika noted that he believes life is a “video game” but that he is pulling the strings. “Everything that you’ve done in your life Keemstar was all leading up to this moment,” Etika said. “Where you can broadcast the start of the beginning of the rise of the known antichrist. I am the antichrist, I am the one who brings death to all.”

Keemstar asked if the events of the last month were a publicity stunt, which Etika vehemently denied. “No, this is my world. You are playing in my game,” he said. The Drama Alert host worked to get him back on topic, bluntly asking if Etika was having a mental breakdown.

“The cops took you to the mental place today, what happened?” He said. Etika’a reply offered no clarity: “I went, I became God, and I walked out.”

Keemstar kept his composure, even after Etika informed him that he, too, is a God. He didn’t even react to Etika’s continuous referrals to him as “dreamy creamy Keemy.” The prominent YouTuber asked about everything from Etika’s reaction to the police arriving at his home to the people he recently blocked on Twitter. In explanation, Etika said he is “tired of weakness.”

Etika’s more than 10-minute-long diatribe focused heavily on death and the state of the world. He even went after Keemstar’s diet, asking him “when’s the last time you ate a salad motherfucker?” He said that the key to becoming God is “pick up a fucking big-ass salad from Whole Foods that has spinach and kale in it.”

The interview ultimately dissolved into bickering. The final 60 seconds or so of the video is all but unintelligible, as the two attempted to speak over one another.

Keemstar revealed at the end of the video, as well as in a follow-up tweet, that Etika blocked him following the interview. Considering how the conversation ended, the development is not surprising.

Etika spent Monday night tweeting about everything from Goku to Thanos. Mixed in with numerous pictures and nonsensical phrases were a few genuinely startling tweets. “None of you ever deserved to have me in your life,” one read.

In the lead-up to the Etika interview, Keemstar contemplated whether YouTube is contributing to mental health issues among YouTubers. After his discussion with Etika, the question seems all the more relevant, though Etika has been banned from YouTube. The Daily Dot reached out to Etika. It is unclear if the streamer is seeking help, but fans everywhere are hoping he will.