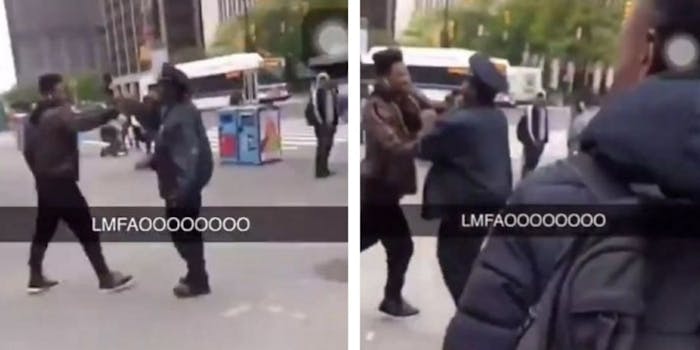 This is the second time this week he's been in police custody.

For the second time this week, popular streamer Etika has been detained by police. This time, though, video appeared to show Etika trying to strike an officer on the streets of New York. Now, his friends are reporting that he’s in the mental health ward of a hospital on a 72-hour stay.

According to streamer Alice Pike, Etika—whose real name is Daniel Desmond Amofah—was not arrested after his confrontation with police.

“A doctor just called me,” she tweeted on Wednesday. “He has NOT been arrested, he’s not going to jail. He’s at the mental ward of a hospital again, not saying where. I gave her as much information as I could that would make sure he STAYS in there for longer than a day!!!”

Video taken from the incident shows Etika flipping the double-bird and then approaching an officer. He appears to push the officer and the officer responds by taking a swing at Etika. A few seconds later, as Etika walks away, multiple policemen approach him before the video cuts off.

On Monday, Etika—who has nearly 300,000 followers on Twitter—tweeted anti-Semitic and homophobic messages. He then live-streamed police officers entering his Brooklyn apartment and detaining him.

Etika just got arrested live on instagram by nypd pic.twitter.com/ilGdf1xBYb

Etika, who had been sending dozens if not hundreds of tweets per day, hasn’t tweeted since 1:50pm ET on Wednesday. But in an interview with gossip channel Drama Alert this week, Etika said he was the antichrist who had “come to purge the planet of all human life.”

Etika, who frightened his fans last month with suicidal messages on Twitter, also said death means nothing and that he wasn’t frightened of it.

“Everything that you’ve done in your life Keemstar was all leading up to this moment,” he told the Drama Alert host. “Where you can broadcast the start of the beginning of the rise of the known antichrist. I am the antichrist, I am the one who brings death to all.”

At one point on Tuesday, somebody using Etika’s name began streaming on Twitch using an old Etika video. But it was quickly determined to be fake.