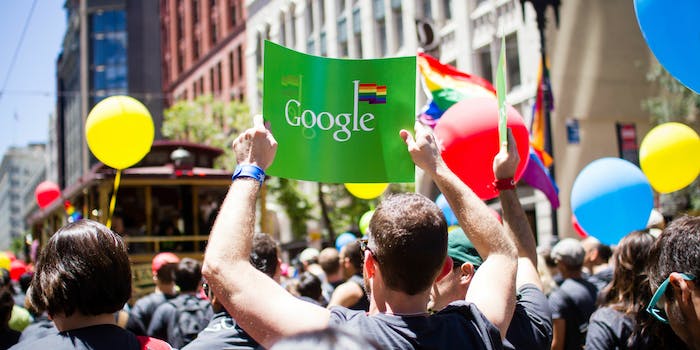 The announcement further sours the feelings of LGBTQ employees.

Google employees who are gearing up to march with the company at a Pride parade this weekend are not allowed to protest at the rally against YouTube for its recent, blatant support for homophobic content, the Verge has reported.

A memo was reportedly sent out to Google employees setting the terms for the upcoming Pride parade and stating that employees can only protest YouTube or Google if they’re not marching with Google. Otherwise, they’ll be in violation of Google’s code of conduct.

YouTube has faced a torrent of criticism after the Google-owned streaming giant initially refused to take down homophobic content by Steven Crowder, who was harassing Vox journalist Carlos Maza in videos. In clips shared by Maza himself, Crowder is seen making fun of him and directly attacking him for his sexual orientation and race, referring to him as “gay Mexican” and “gay Latino” among other names.

Maza later said that he had received numerous hate emails and death threats from Crowder’s supporters while YouTube remained silent.

“Crowder and his allies have uploaded multiple videos targeting me for additional harassment,” Maza wrote amid days of YouTube’s inaction. “Nothing will happen to him. Because @YouTube doesn’t give a fuck about queer creators.”

He was right—when YouTube finally did break the silence, it did so by claiming that Crowder’s commentary was “opinion.”

“While we found language that was clearly hurtful, the videos as posted don’t violate our policies,” YouTube wrote in a Twitter thread in response to Maza’s tweet. “As an open platform, it’s crucial for us to allow everyone–from creators to journalists to late-night TV hosts–to express their opinions w/in the scope of our policies. Opinions can be deeply offensive, but if they don’t violate our policies, they’ll remain on our site.”

Crowder remains on YouTube with more than 3 million subscribers.

This can't be reiterated loudly enough: YouTube's "reversal" decision to demonetize Crowder's channel treats him the same as pro LGBT channels, which are not allowed to monetize.

It's sad that for many, the only way to find real #LGBTQ content is YT. Bc of the lack of LGBT content in media, we go to YT to find LGBTQ creators that represent us. It's such shit that the only platform that facilitates this also allows discrimination against us #NoPrideinYT

Making the switch. My before and after pic #NoPrideInYT pic.twitter.com/N2UEwrMKr9

Google employees ran an internal petition demanding that Google and YouTube remove Pride branding from its companies, according to BuzzFeed.

San Francisco Pride board members were in touch with Google, one of its biggest donors, about their concerns following the incident, but it was too late for any changes.

More recently, some employees were discussing in an LGBTQ email group that the company should be removed from the float at San Francisco Pride, according to the Verge. Some wanted to protest against YouTube during the Google rally. In response to an employee asking if this would be permissible, Google said no.

“Employees are free to make whatever statement they want personally, apart from our corporate sponsored float/contingent,” part of the email stated, according to screenshots given to the Verge. “But they are not permitted to leverage our platform to express a message contradictory to the one Google is expressing.”

San Francisco Pride will be held on Sunday.