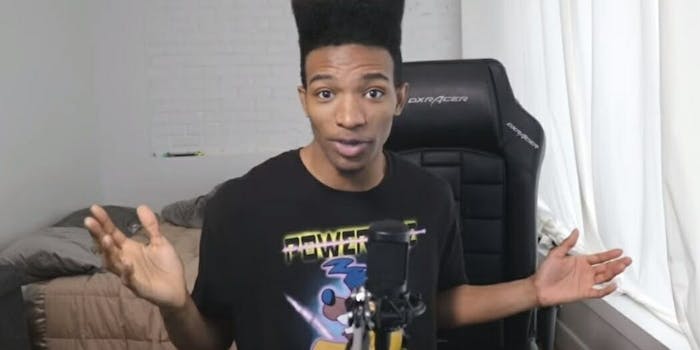 'I'm so sorry I betrayed you all.'

A YouTuber with a long history of suicide threats has gone missing after posting a video in which he said he was sorry for betraying so many people and for “leaving such a stained legacy.”

Etika, who last worried fans in April when he made comments about killing himself on Twitter, uploaded a video titled “I’m sorry” that showed him walking around outside and apologizing for betraying the people’s trust and for acting like a “clown.”

Etika, whose real name is Daniel Desmond Amofah, recorded his video during daytime hours, but he didn’t schedule his upload until midnight on Thursday.

During his video, he blamed his mental health issues and social media “that consumed me and made me forget about consequences to my actions.” He also said the world would be better off without him.

After nearly eight minutes, the video—which has been watched nearly 200,000 times as of this writing— abruptly cuts off.

In his video description, Etika wrote, “God… I’m so sorry I hurt you all so badly. I’m so sorry I betrayed you all. I mislead [sic] so many of you, I manipulated, I lied, I shifted blame… I don’t know what awaits me on the other side, but I’m ready to face it. As far as we know, there is no life after death. My time ends now, but if there is a way for me too, I’ll send you all as many blessings as I can from the other side.”

His video sent Twitter into a panic after it was uploaded—and as of this writing on Thursday morning, Etika’s whereabouts are unknown.

One his close friends, Alice Pika, tweeted at 2:47am, “He hasn’t reached out to me and I’m not going to call him again. Only if he feels like he needs my help will I help him but of course there will be limits. I’m not even sure his friends would answer my calls if I tried, that’s how bad my relationship with that man is.”

Later, she tweeted, “It’s hard to be upset at those who called me insensitive. For lack of a better term, this is an emotional rollercoaster and everyone is on-edge. I’m disappointed he didn’t get the help he needed and I had no way to stop this. Again I still think he’s okay. I hope. Heavy denial rn.”

According to Rod Breslau, an esports consultant and gamer, police were called but they couldn’t locate at him at his New York City apartment.

police have been called and they are searching for Etika, who was not found at his apartment, and are now checking downtown NYC and the bridges, according to @DoubleA_Charged pic.twitter.com/YjfxZ6L8ba

Since his suicide scare from two months ago, Etika was criticized for tweeting anti-Semitic and homophobic messages. Last month, Etika, calling himself the antichrist and a god, told gossip channel Drama Alert that he wanted to “purge all life.” A day after that, Etika was detained after fighting with a police officer.

In his latest video, Etika said he wasn’t actually suicidal before but “everyone has got to pay for their sins at some point. I guess mine caught up to me.”

Still, some were skeptical, especially when people found this tweet.

Said Etika in his latest video, “I shouldn’t have pushed so many people away. Now I have nobody.”