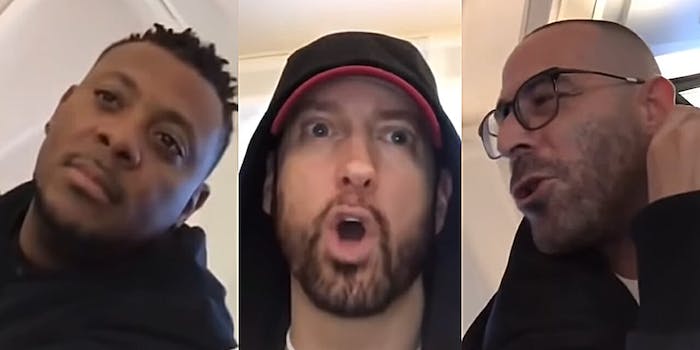 Eminem tells you what not to rhyme

'You can not be a mobster, and eat lobster.'

Eminem is tired of your recycled rap lyrics and would like to offer you an extended lesson in how not to be a rapper.

The Detroit star recently livestreamed on Instagram a lengthy rundown of refried, redundant rhymes that up-and-comers have been trotting out since the ’80s. Are you an aspiring emcee who has composed couplets that rhyme “party” with “Bacardi?” Eminem is talking to you.

Alongside faithful genre veterans Mr. Porter, Royce da 5’9”, and the Alchemist, Eminem attacked cliche lines like “I’m a pimp walking with a limp” that have littered countless B-sides, tapes, and SoundCloud uploads for far too long.

“You can not be a mobster, and eat lobster,” Eminem declares.

“You are allergic to shellfish,” Mr. Porter says.

“Eat something else,” Alchemist adds.

The livestream made it to YouTube, and on Wednesday morning became a trending Reddit video. It’s easy to understand why: Eminem is basically doing observational humor for hip-hop heads. Plus, it’s an awkward vertical video with dad-like cinematography, and the intimate clip plays as refreshingly authentic from the historically guarded celeb.

Eminem is touring behind December’s Revival record, though his stage show has garnered criticism for sound effects that resemble gunshots. In April, the rapper born Marshall Mathers celebrated 10 years of sobriety via social media. These days, the 45-year-old seems loose and happy, as long as his rap isn’t littered with weak-as-hell rhymes like “I spit truth in the booth.”