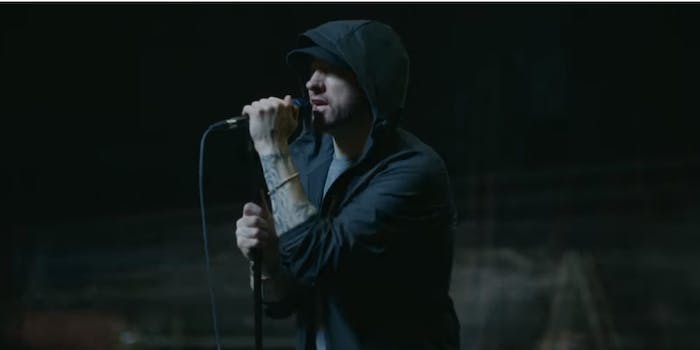 Eminem's manager says he's been using the sound effect for a decade.

Last week during his performance at Bonnaroo, Eminem ended his song “Kill You” with what sounded like a loud gunshot sound effect, which frightened many concertgoers at a time when shootings at concerts have unfortunately become more frequent.

The song is nearly 20 years old, and his manager Paul Rosenberg addressed the criticism on Instagram, stating that Eminem has used the sound effect in concert for more than a decade. He also clarified that it is not a gunshot sound, but a “pyrotechnic concussion which creates a loud boom.”

Contrary to inaccurate reports, @Eminem does not use gunshot sound effects during his live show. The effect used by Eminem in his set at @bonnaroo was a pyrotechnic concussion which creates a loud boom. He has used this effect — as have hundreds other artists — in his live show for over 10 years, including previous US festival dates in 2018 without complaint.

After YouTuber Andrea Russett tweeted about the sound effect, saying, “I hate to be the one to say it, but being someone who suffers from very mild PTSD, it was EXTREMELY irresponsible and distasteful to end songs w the shot gun sound effect,” fans on social media went back and forth about it, with some saying people shouldn’t be at an Eminem show if they can’t handle the sound of a gunshot. Others posted clips from Bonnaroo that show the startled reaction after the “pyrotechnic concussion.”

But Eminem is apparently not bending to criticism. Rosenberg posted a photo from his Firefly Music Festival appearance this weekend, which included a disclaimer: “If you are easily frightened by loud noises or offended by explicit lyrics you shouldn’t be here.”

In March, Eminem targeted the NRA during a performance of “Nowhere Fast.”