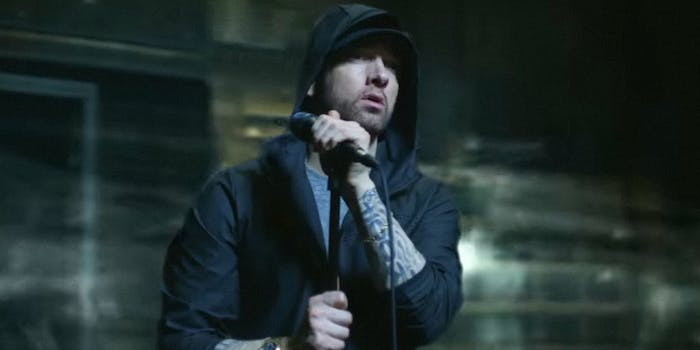 Over the weekend, the rap star told fans about his progress via Twitter and Instagram. “Celebrated my 10 years yesterday,” the rapper born Marshall Mathers wrote, while holding his Alcoholics Anonymous coin. Emblazoned with the Roman numeral X and the words “service,” “unity,” and “recovery,” the international aid organization gives out these coins when members reach the milestone.

The 45-year-old artist has struggled with substance abuse issues and lionized his use of drugs on early career songs like “My Fault,” “Drug Ballad,” and “Purple Pills.” But it was abusing prescription drugs like Ambien and Vicodin that did the most damage, he says. Both 2009’s Relapse and 2010’s Recovery chronicled his road to sobriety, and December’s Revival details a 2007 drug overdose that nearly killed him.

For once on social media, the replies to Eminem’s Twitter post were heartfelt and inspiring and fans tweeted their AA coins in solidarity while opening up.

Day one I actually looked up a bunch of artists that were sober and you and aoki and Barker inspired me the most; congrats my dude! I hope to be there one day! pic.twitter.com/vhQ4br1aDI

Congrats man. I had my 1 year yesterday too . pic.twitter.com/1wwiYeb2KF

Eminem said that running helped get him sober as well, and in 2011 wore a sobriety necklace during his Grammys performance.