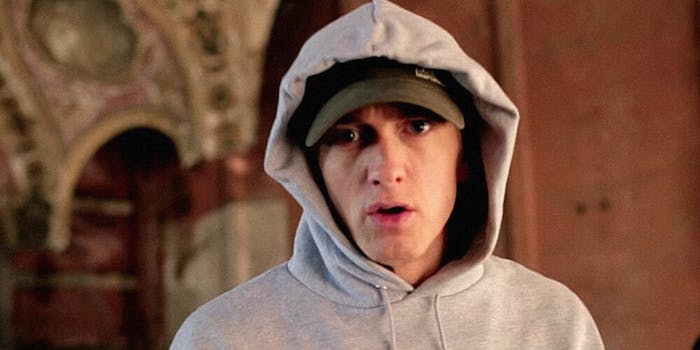 Eminem kidnaps Ivanka Trump on ‘Revival,’ but he reveals some regrets

His new album is all over the place.

Eminem’s ninth album Revival hit Spotify on Friday, and after more than 20 years and 100 million albums sold, he’s still rapping about kidnapping women and stuffing them in the trunk. Except this time it’s the president’s daughter.

“How the fuck is Ivanka Trump in the trunk of my car?” he goofs on “Framed,” a song about being framed for a murder that he doesn’t recall committing. It’s the twisted humor you expect from an angry man who copped to domestic violence on 2010’s “Love the Way You Lie.” But he sounds like a rapper who has lost his fastball.

Revival is not subtle, and the 19-song, hour-and-17-minute album covers lots of emotional headspace. On “Offended,” the 45-year-old artist born Marshall Mathers pushes back at the concerned activists who have attacked his violent, homophobic language for two decades. He still wants to make dirty jokes, but it feels conflicted now. “These drums and hard snares bring out the worst in me, like Justin Ross Harris at a nursery,” he raps about the Georgia dad whose son died after being left in a car seat for seven hours. It’s cringe-worthy. But later in the song, he has second thoughts about hanging out with women half his age and his back catalog of misogynist rap songs: “I made strides with these rape lines, I’m cutting back on women hate crimes.”

The new album comes amid the Trump age, and it boasts the sort of anti-establishment pushback Eminem’s been riffing on since the Clinton administration. But he’s also rapping in the time of #MeToo, and nine years sober, he shows remorse for the way he publicly attacked ex-wife Kim Mathers during his professional prime. “Remind Me” playfully recreates the star-crossed couple’s meet-cute, and “Bad Husband” is clear-eyed in its intent: “I’m sorry, Kim.”

It doesn’t stop there. “River” features acoustic bloke Ed Sheeran and details bad romance; the Pink-assisted “Need Me” tackles co-dependency; Skylar Grey shows up to fanfic Eminem’s demise at the hands of a man-eater on “Tragic Endings.” (“She gassed the car with lighter fluid. She’s standing there with a rag, about to put the lighter to it.”) Beyoncé, Alicia Keys, and Kehlani round out the guest list of strong women pop stars who sing hooks, while producer Rick Rubin runs Eminem on treadmills. He speeds up rock standards like Joan Jett’s “I Love Rock ‘N’ Roll” into beefy, noisy rap beats—a trick he’s been working since the golden era of the Beastie Boys and that he perfected on Jay-Z’s “99 Problems.”

Revival is an album of regret and repenting: “There’s nothing like holding your head up high when you’re dead inside,” Eminem admits on the Cranberries-sampling “In Your Head.”

These days Eminem is an old man, stewing in the tool shed with his radio. “I listen to pretty much everything that comes out,” the rapper admitted recently to Elton John. And while songs like “Believe” pick on younger rappers for being wack, Eminem appears to be trying to reconcile all the things that he’s done. “Castle” regrets how he handled being a father in the public eye, and the album-closing “Arose” recreates a December 2007 overdose that almost cost the rapper his life. “I’ve said your name but always tried to hide your face,” he half-apologizes to 21-year-old daughter Hailie Jade.

The pain and anger that made Eminem’s raps spellbinding peaked with 2002’s The Eminem Show. He’s re-emerged a cranky, repentant thinker who admits to being friendly with the neighbors of his gated community. In a year that made rich white men meditative about their past indiscretions, Eminem proves he’s no exception.