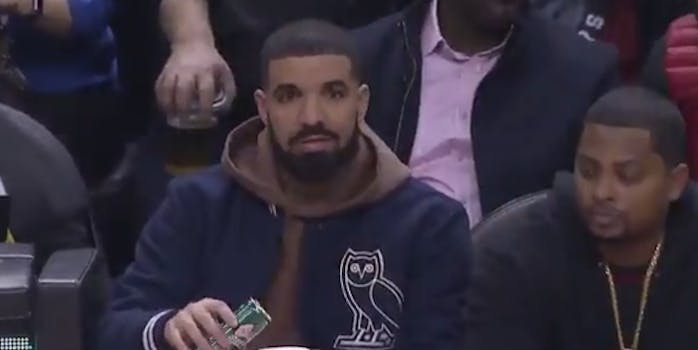 Drake did what he does best Wednesday night and graced us all with an accidental meme.

The moment took place while the rapper was sitting courtside at an NBA game to cheer on his hometown Toronto Raptors. The camera cut to Champagne Papi during a candid moment—while he was pouring the contents of what appears to be a grapefruit-flavored Perrier into a white plastic cup. You’d think that would be a ho-hum shot of the celebrity, but for some reason, as soon as he noticed himself on the Jumbotron, the rapper froze like a teen caught throwing a house party.

“Do I put the can down?” you see him asking himself, inexplicably frazzled. “Or just keep… pouring?” Eventually, he smirks and decides to go with the latter.

Aside from general social awkwardness, there are a couple business reasons Drake might have wanted to avoid holding the can in public. He has partnered with Sprite a few times over the years and recently launched his own whiskey, so that could explain some of his hesitance to be caught on camera enjoying another company’s seltzer. Or maybe he was just mixing an adult beverage with something he’d brought from home and didn’t want to get in trouble with arena security. In the end, whatever his concerns were, Drake’s love of a good time ended up winning out over everything else.

When the waiter comes to ur table after 20 minutes and asks if ur ready to order and u haven’t even looked at the menu https://t.co/MsJf6GhLSt