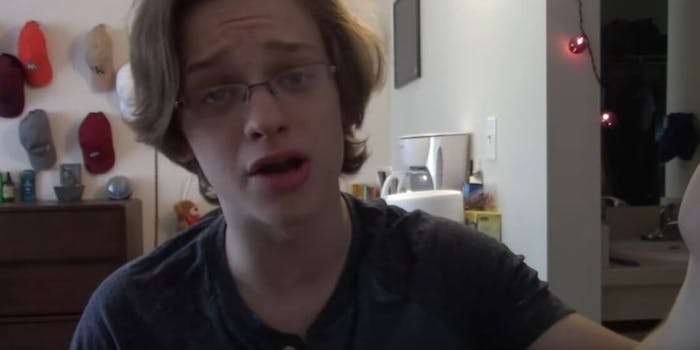 He 'was such a talented young comedian,' PewDiePie wrote.

With rumors swirling around the internet that Dillon the Hacker died last month, PewDiePie seemingly confirmed the death of his so-called enemy on Thursday morning, posting on Twitter a remembrance of the 20-year-old YouTuber.

“Dillon the hacker was such a talented young comedian,” PewDiePie wrote. “He successfully trolled my entire audience at one point. Such sad news to hear about his passing. My condolences to his family and close ones. RIP Dillon.”

Dillon the Hacker, whose real name was Dillon Henderson and who lived in Arizona, used his YouTube channel—which had 136,000 subscribers—to go on unabated rants, and at times, he targeted vlogging stars like Smosh, Markiplier, and Jacksepticeye. He also continuously blasted 4chan.

He started his YouTube channel in 2014 and almost immediately began attacking PewDiePie.

“PewDiePie is an absolute joke,” Henderson screamed in a 2014 video titled “PewDiePie ROAST …. PEWDIEPIE SUCKS!!!!” “He is not a true gamer like me, and if I ever see him in real life, I’m going to do to him what I do to all nerds. I’m going to throw him in a trash can. PewDiePie, you’d better be afraid of me. I’m your worst nightmare.

That 54-second vlog drew more than 1.1 million views, and suddenly, the rivalry between the two was on. Later, Henderson said he had stolen PewDiePie’s channel from him and claimed he had taken PewDiePie’s girlfriend as well. All of it drew the ire of PewDiePie’s fans.

Though his rants seemed to be purely satirical, he told the Daily Dot in a 2014 interview that his videos and their content were real.

“There is nothing about Dillon the Hacker that is fake,” he said. “You have so many ‘actors’ on YouTube playing fake characters for attention like Boogie2988, or Shane Dawson who dresses up in ridiculous costumes. My goal is to bring reality back to YouTube by telling it like it is. A lot of people … wish that I am fake or that I am trolling, because I scare them so much. But unfortunately for all of them, their worst fear is true: This is real. Dillon the Hacker is real and he is taking over YouTube.”

As of this writing, it’s unclear how or when Henderson died.