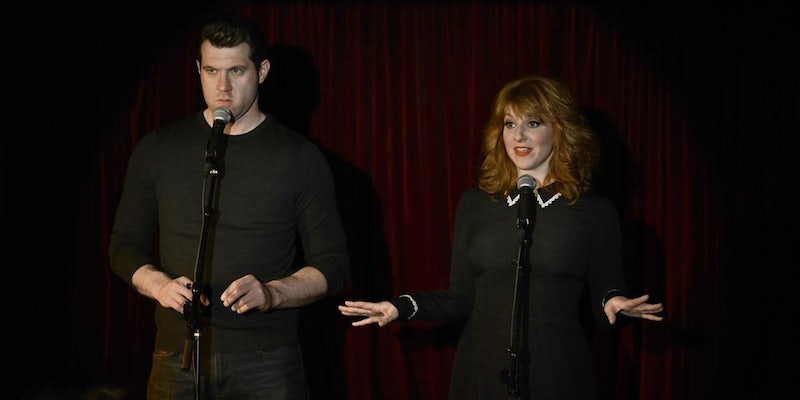 It's a great time now for women in comedy.

In the very first scene of Difficult People, we get Julie Klausner and Billy Eichner distilled to their essence: They rush through a herd of pesky, needy people on the street until they finally collide, falling easily into the comfort one only finds in a best friend who hates everything and everyone with the same intensity you do.

Difficult People is Hulu’s latest original series, created and written by its star, Klausner. She plays Julie Kessler, a self-absorbed, Twitter-obsessed performer who does TV recaps for a website. Eichner stars as Billy Epstein, a self-absorbed, Twitter-obsessed performer who works a service industry job he hates. They are, as Klausner says, “less self-aware versions of ourselves.”

The show pulls the threads of traditional sitcom roles: Julie’s boyfriend, played by James Urbaniak, is a soft, supportive foil to her Type A personality, even when she makes a hasty decision to have a three-way with a boring high school crush; Gabourey Sidibe plays Eichner’s rude boss, who seems more like a friend than an employer; and Shannon DeVido, a comedian who’s also disabled, appears in the second episode and gets the best joke.

Klausner says Curb Your Enthusiasm was a source of inspiration, but here, she’s Larry David. “And I wanted Billy to play my best friend in it, and I wanted to use stories from my real life that I had spoken about on my podcast” as its foundation, she added.

Her podcast, How Was Your Week, provides plenty of material. She’s used it as a platform to discuss Cannibal Cop and deliver stunning Tony Bennett impressions, and more recently, she’s channeled her feelings about having her own show and being nudged into the spotlight. In April, she spoke about having to debut episodes of Difficult People at the Hulu Upfronts, and being nervous about having to “clomp” on the red carpet.

“What if people extend the same critical eye that I extend to—sure, everything, but mostly myself?” she says dramatically. “What if they see my flaws?”

She says that while she’s always been confident as a writer, “I am kind of grappling with the guilt of like, ‘Well, did I really deserve to be seen? What makes me so great? I’m not a size 0 gorgeous actress. There are certainly more talented actors than [me]. Why is it important that people see me? That’s something I’m kind of reconciling as a performer. The short answer is ‘because I really love it,’ and that might be selfish. But I also hope that, at the very least, I can set an example for other girls and women who see something good about what I do and maybe give themselves permission to be seen and heard.”

Hulu’s had moderate success with original content so far, but it hasn’t had a real breakout hit just yet. Difficult People was originally headed to USA until its scripted comedy department dissolved. Amy Poehler, one of the show’s producers, then helped shop the pilot around, and Hulu stepped up.

Klausner and Eichner first came together creatively on Billy on the Street, a YouTube series turned Fuse show in which Eichner yells pop-culture trivia at people. Eichner plays a similar version of that character on Parks and Recreation, but here, we get to see a bit more range and feel some empathy.

“We really got to know each other working together [on Billy on the Street],” Klausner said. “Billy and I definitely speak the same language. We both take pop culture comically seriously, we both have similar opinions about pop culture, we both think celebrities being important is really funny, and we also treat them like they’re really important and we’re very irreverent.

“But in addition to that, we both have a very easy form of communication. We’re similarly analytical about what works and what doesn’t and why when it comes to writing a bit or a joke or a game for his show. And on top of that, we just happen to have chemistry, which is kind of hard to describe or find when it isn’t there.”

Difficult People also subtly critiques how the media often talks about women in comedic roles. The great Andrea Martin plays Klausner’s mother, and in the pilot episode, she tells her daughter over lunch about a Lena Dunham article, informing her that it’s a “great time now for women in comedy.” Klausner is positioning the difficult, oblivious woman front and center—much like Girls, The Comeback, and Inside Amy Schumer—and trying to shift the gaze.

“I wanted to put on television a female and a gay male lead who were not supportive, chipper sidekicks,” she said. “My relationship with my boyfriend on the show was very important, because often in traditional sitcoms, the guy is the one who gets to be funny, and being funny can entail being difficult or obnoxious or oblivious. Like, there’s all these comedy archetypes of leading men in sitcoms and then they have their wives, who are the voices of reason, and they stand behind them and they say, ‘Ray, that sounds crazy’ or ‘Why did you do that, Larry?’ … But in the process of being idiots, those male leads also get all the jokes, and they actually get a chance to be funny.”

She says it was also essential to offer a realistic portrait of a gay man, and not the media stereotype of “the equivalent of small dogs in purses,” Klausner said. “Billy is so refreshingly angry. His anger is like oxygen. And I think that is important for people to see: an unpleasant, loud, angry, gay man in a comedic lead on a show, in the same way that I think it’s important to see a non-specific, non-self-aware, angry, and ridiculous female character on a comedy.”

As this is a show about versions of themselves, parts of Difficult People feel a bit insular: the references to UCB, the inside-baseball celebrity quips, the jokes about Bravo recaps. They agonize over tweets they sent about Blue Ivy and Chelsea Handler and vow to be nicer to celebrities. In eight episodes, one hopes to get a chance to feel something for these characters, to see them evolve beyond being a channel for obscure references and sick burns.

But at its heart, the show is about the friendship between Klausner and Eichner—two people who don’t see anything wrong with a joke about R. Kelly peeing on Blue Ivy or driving away from a hit-and-run involving Talking Heads frontman David Byrne.

“Friendship is the heart of most good TV shows, isn’t it?” Klausner says. “If it’s not friendship, it’s family. The Golden Girls and AbFab, those shows both sort of draw on the themes of chosen family, which I think is essential, emotional material for people who live in cities and people who are creative and people who sort of find each other and find people that understand each other and speak their language.”