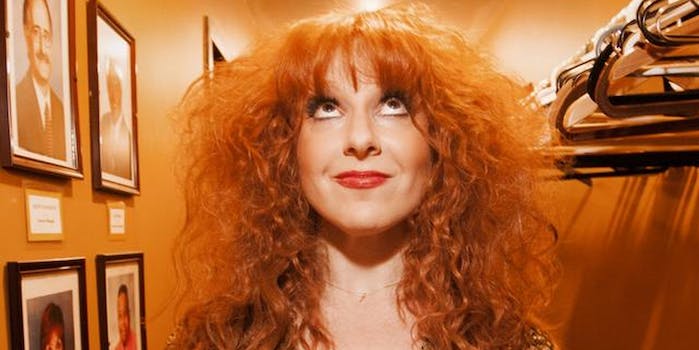 How Julie Klausner redefined the monologue with ‘How Was Your Week’

On a recent episode of Julie Klausner’s podcast How Was Your Week, somewhere in between her dispatch from the trenches of Jessica Seinfeld’s Instagram and her sincere ode to Hero Cat, she exhales:

“Enjoy your window to my process.”

She jokes that should be her podcast’s new title; it’s not that far from what happens every week on the NYC comedian/performer/writer’s show. It often feels like she’s working out ideas in real time. Not all of them work, and when a bit or idea goes astray, Klausner’s adept at (often abruptly) reeling herself in.

How Was Your Week has been around since 2011, and each show opens with a monologue before leading into a guest interview. In an April monologue, she wondered why she didn’t have her own show yet, when Neil deGrasse Tyson has one, and he’s never even done “one ASSSSCAT” at Upright Citizens Brigade Theatre.

Those thoughts manifested into reality last month, when it was announced the Amy Poehler-produced Difficult People got a pilot, which Klausner wrote. She and Billy Eichner star as best friends in NYC, “who hate everyone but each other.” It was allegedly pitched as Will and Grace, “if one was a six and the other was a seven.”

“I wrote it in hopes of making it, and showed it to Amy, and Amy agreed to produce it,” she says. “So we went around and pitched it as a pitch of what the series would really be about, and what the show would look like, not just the script I wrote. And we sold it to USA; they gave us money to make a pilot presentation.”

Klausner came up in the UCB Theatre, her “alma mater,” where she met Poehler in 2000. Poehler also produced Broad City, another NYC show about difficult people, and Eichner stars with her on Parks and Recreation. Klausner wrote for Eichner’s Fuse show, Billy on the Street, and spent early 2014 in L.A. writing for comedian John Mulaney’s new show, Mulaney, which debuts in the fall on Fox. In 2010, she released I Don’t Care About Your Band, a memoir that felt series-ready in its own right.

No doubt this all prepared her for her own show. She and Eichner have a rare chemistry—on Twitter they read like a two-person comedy act—which will happily translate to Difficult People.

“We are sort of playing versions of ourselves that are slightly heightened but pretty realistic,” Klausner says. “I’m grateful that I have instincts that came from writing sketch comedy. I think they make me a better writer for any kind of comedy.”

How Was Your Week often feels like a series of sketches, some of which dive into darker pop-culture depths. Recently, she reported from the Charles Manson murder tour in L.A., and it’s one of the most vivid longform pieces that exists in podcast form. Earlier this month, she addressed career disappointment, age, and the ridiculousness of Slender Man, “our generation’s Nessie.” She wondered whether the “Slender Man diet” would catch on. (First week is all sugar and carbs. Second, you eat nothing. Third, you turn into a ghost.)

I can’t believe they got Slender Man to host the Tonys.

When asked about Jessica Seinfeld, whom she referred to as the “living embodiment of YOLO” on the podcast, she has no comment, except that she wishes her “light and love.” So I ask Klausner about her support for Hero Cat and Hammock Bear, whom she’s spoken about at length on HWYW. What is it about these stories that engages us?

“It’s animals acting against type, or animals acting exactly the way you want them to, based on what we know from cartoons,” she says. “In the case of Hammock Bear, he’s acting exactly like you’d expect a bear to act in you were in a Looney Tunes short. In the case of Hero Cat, she acted the opposite of what you expect cats to be like, and that footage was so compelling.

“We also like to project our meanings onto animals, because we can’t tell what they’re thinking. With Hero Cat, I don’t think we misinterpreted it.”

The How Was Your Week Wiki page keeps a detailed outline of references, notes, and enemies of the show, which gives the podcast an old-school variety show feel, one very much in league with WFMU’s The Best Show. Klausner is an entertainment critic and one-woman show.

“I don’t mean the podcast to be a sketchpad of ideas I have,” she says. “I like the idea of the show to be an entity in itself. I really treat it as the show that I want to do. The Julie Klausner Show. Because nobody is telling me what to do or what not to do. I can talk about anything I want to; no one’s going to say, ‘Oh, maybe that’s an outdated reference’ or ‘Maybe there’s no reason to talk about the Nightmare on Elm Street documentary for 45 minutes.’”

On a recent episode, she wondered if we’re in “the bayou of ideas” on Twitter right now. I asked about a recent podcast segment reflecting on the #yesallwomen hashtag. Is hashtag activism valid, or does it fill her with a certain dread?

“The only dread I feel when I see something serious like that is the inevitable occurrence of some awful person I follow, either for hate-following reasons (and I’m really trying to reduce my hate-following habits) … makes it about them. I do think the solipsism of social media gets in the way of a lot of what could be great about it.

“But we’re also just still getting used to the etiquette of it. You know, like whenever a celebrity dies, you feel very weird tweeting about something until you’ve acknowledged that the celebrity has died. People are looking to you for your official statement. But as far as hashtag activism… there’s incredible potential for people having access, people joining forces and having a larger voice than one asshole who happens to have a microphone.

“And look,” Klausner adds, “I commit little career suicides constantly, and sometimes it’s because I just can’t help myself.”

It’s all part of the process.

New York City can catch An Evening of Cabaret With Julie Klausner at Joe’s Pub, June 23-27.