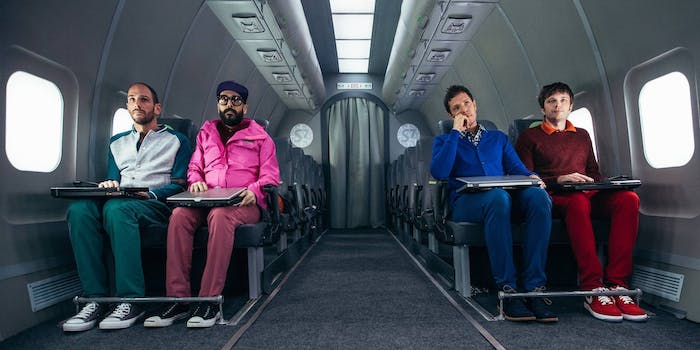 The politics of OK Go

Following the shocking election of Donald Trump, Damian Kulash is still working through what the hell he’s supposed to do.

“I wish there was a simple answer,” the OK Go singer tells the Daily Dot about the future of musicians under a Trump presidency.

He may write optimistic and vibrant pop songs, but the Ivy League-educated rock star has a long history of on-the-record dissent when it comes to elected officials.

Kulash—who hails from Washington, D.C.—will return to the nation’s capital for a much happier occasion this week. OK Go will be honored at the Smithsonian’s 2016 American Ingenuity Awards. The annual ceremony acknowledges breakthrough work in the arts, sciences, and social progress.

After the 2004 re-election of George W. Bush left Nobel Prize winner Toni Morrison disillusioned and paralyzed about the future, a friend gave her the following advice, which she recounted in the Nation: “This is precisely the time when artists go to work—not when everything is fine, but in times of dread.”

Like Morrison, Kulash is no stranger to working through such times. In the months leading up to the 2004 election, the 41-year-old frontman released a 10-page PDF document, “How Your Band Can Fire Bush,” that advised musicians to use their influence to rally the progressive left.

No one else comes face to face with the progressive and left-leaning citizens of this country every day. No one. Think about it. Conservatives speak to their followers at church every week. They have an immensely powerful voice through right-wing radio. Liberals have nothing like this, except you.

Turns out the portion of the country that elected Trump wasn’t listening to any of Kulash’s colleagues.

“Here’s the problem from my perspective. A lot of people feel like it’s time to protest. I agree it’s time to do something,” Kulash says, referring to nationwide anti-Trump demonstrations that have broken out since Election Day.

Yet Kulash is more concerned by the anger that fueled the populist tide that made Trump’s presidency possible, rather than Trump himself.

“There are plenty of assholes in the world. The problem’s not that Donald Trump is an asshole. It’s that we elected him,” he says.

It’s a bad time to preach to the choir, he says, and a good time to figure out why such a large chunk of the country voted for the former reality TV star. How can the divide between red and blue be bridged?

“There’s no one prescription. It’s a bad time,” Kulash says.

It’s been more than a decade since a little-known Chicago indie band called OK Go uploaded some quirky, absurdly low-budget music videos on YouTube that catapulted them to global stardom.

In a content mill overrun with forgettable viral clips, they’re still a thing.

The band continues reaping success from 2014’s Hungry Ghosts, releasing two new music videos from the record this year. They continue challenging the constraints of the medium: Most recently a slow-motion music video for “The One Moment” took only 4.2 seconds to film.

They’ll be honored at the Smithsonian Institution this week for “Upside Down & Inside Out,” the first music video filmed in zero gravity.

Back in 2006, the notion of internet fame was a novelty. If then-Sen. Barack Obama’s presidential campaign was the first to truly “get” the internet, OK Go was the first such rock band.

The office of the little-known Illinois senator created its own YouTube channel in 2006, the same year OK Go debuted on the nascent platform. Millions of Americans watched and re-watched the four members of OK Go—Kulash, bassist Tim Nordwind, drummer Dan Konopka, and guitarist Andy Ross—dance on treadmills in the music video for “Here it Goes Again.” In the early days of Facebook, Twitter, and smartphones, many shared the videos with friends and relatives through email or AOL Instant Messenger.

But a decade later, everyone from your mother to the white nationalist “alt-right” to President-elect Donald Trump knows how to game the internet.

Obama—a president whom OK Go actively campaigned for through the 2008 and 2012 elections—will soon be replaced by Trump, an abrupt pivot to say the least. Fifty million viewers spent 14 million hours watching Obama’s YouTube channel by November 2008, a figure that by today’s standards seems tiny. (Half that watched a pair of Facebook Live videos from the Trump campaign, for instance.)

The band is no longer held back by the low-tech demands of a DIY budget; hell they went on to partner with NASA engineers on the video for 2010 hit, “This Too Shall Pass.” In fact OK Go “broke up” with YouTube earlier this year—the very platform that delivered so many fans—due to its increasing restrictions on sharing copyrighted content. The band opted to release a new music video for “Upside Down & Inside Out,” a song from Hungry Ghosts, on Facebook instead.

The internet age’s most defining rock outfit strives to protect it, too. Kulash testified before Congress in support of net neutrality back in 2008, which Trump has signaled he is against. The president-elect appointed a trio of anti-net neutrality operatives to his transition team on the Federal Communications Commission. The Atlantic reported that Roslyn Layton, Jeffrey Eisenach, and Mark Jamison—all on Trump’s transition team—have argued against net neutrality in court. (Eisenach and Jamison worked for Verizon and Sprint, respectively.)

Kulash says he would certainly join the fight if net neutrality were to be challenged under the Trump administration.

“It feels like a bad dream. As just so much of this does,” he adds.

Kulash sings, plays guitar, and co-directed the “Upside Down and Inside Out” clip with his sister Trish Sie.

What makes him so happy about receiving an award for innovation is that it acknowledges that today’s artists are cross-disciplinary, he says. The distinction between categories like “filmmaker” and “musician” have already grown fuzzy—and he thinks that’s how it should be.

His fellow American Ingenuity winners are likewise politically minded, and include Aziz Ansari, the popular comedian and son of Muslim immigrants who penned an op-ed in the New York Times this year, “Why Trump Makes Me Scared for My Family“; and LeeAnne Walters, a mother who helped spread word about lead-contaminated water in Flint, Michigan. Also honored that night will be Washington Post and Amazon owner Jeff Bezos, who said Trump’s behavior “erodes democracy.”

“It’s a good time to be thinking about how we can communicate with each other better,” Kulash says. “How do we get out of the loop of fake news? How can we connect with the rest of the country more?”

It’s a crucial moment for artists in the country to see themselves as “creative problem-solvers,” he says, rather than mere entertainers.

But artists who channel their anger toward Trump will ignore one irreconcilable fact: We live in a country that was angry and divided enough to elect the outsider.