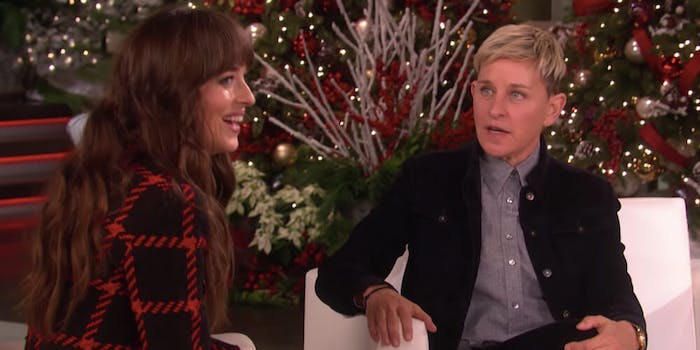 'Actually, no, that's not the truth Ellen.'

Most celebrities play along when talk show hosts try to embarrass them, but Dakota Johnson isn’t playing anyone’s games, and we’re wholeheartedly obsessed with her after watching how she handled herself in an awkward AF situation.

The 50 Shades of Gray star stopped by The Ellen DeGeneres Show last week to promote her new movie, The Peanut Butter Falcon. But things quickly devolved when DeGeneres asked Johnson how her 30th birthday party was, quipping that she hadn’t been invited.

“Actually, no, that’s not the truth, Ellen. You were invited,” she corrected the talk show host. “Last time I was on the show, last year, you gave me a bunch of shit about not inviting you, but I didn’t even know you wanted to be invited.”

If it had stopped there, it still would have been awkward and funny. But of course, it didn’t. And instead, the interview gradually climbed the ranks to become a truly iconic level of uncomfortable.

“I didn’t even know you liked me,” Johnson continued, as the audience “ohed!” in shocked unison.

“Of course I like you. You knew I liked you,” DeGeneres prompted, to utter silence from her fearless guest star.

Dakota's delayed response when Ellen said, "You knew I like you" 👀

After an amazingly uncomfortable moment, Johnson turned the conversation back to how she had, indeed, invited DeGeneres to her birthday party this year and that DeGeneres had snubbed the invite.

But Johnson would not be gaslit, and got DeGeneres’ producer to confirm that she had, indeed, been invited and was “out of town.”

But no, it still didn’t stop there.

Attempting to salvage the interview, DeGeneres brought up how Tig Notaro had performed at Johnson’s birthday party, the one she was definitely invited to but totally did not attend, to which Johnson absent-mindedly responded: “She’s my favorite comedian.”

Honestly, things really continue devolving from there, and the internet can’t even begin to decide which part of this truly iconic interview was the best part–because every part of it was the best part.

Things got even crazier when, after the interview aired, the internet did what the internet does best and dug into DeGeneres‘ claim that she was out of town during Johnson’s birthday. And what they found made everything even more absurd.

Ellen missed Dakota Johnson’s birthday party because it was the same weekend she attended that football game with George W. Bush. I’m shaking you guys… https://t.co/kwaUqlf1L3

Dakota Johnson shading Ellen for missing her birthday is 1000x better when you realise it’s because it was on the same day Ellen was at the NFL with George W. Bush. https://t.co/0uptzyq0I6

While DeGeneres certainly hasn’t confirmed that she missed Johnson’s bday for the football game hangout that pissed off half the internet, one thing we do know for sure is that we’re all stanning Johnson and her brazen lack of f*cks to give from here on out.

“Dakota Johnson is the best possible result of nepotism in that she’s actually talented AND her upbringing as the child of A-List celebrities means she is afraid of absolutely no one,” Twitter user @dreamoforgonon pointed out. (Johnson is the child of Melanie Griffith and Don Johnson.)

play this video of dakota johnson not giving a fuck about ellen and calling her out at my funeral pic.twitter.com/oIAFVrJ8Ph

I went to elementary school with Dakota Johnson and even though I was in 6th grade and she was in 4th, I would get the nervous sweats around her. So yeah, she not afraid of Ellen and her Keds.

Literally no transcript or retelling could ever do this moment in history justice, so do yourself a huge favor and watch the full video below. And tune in next year to find out if DeGeneres‘ invite to Johnson’s 31st birthday party gets mysteriously lost in the mail…