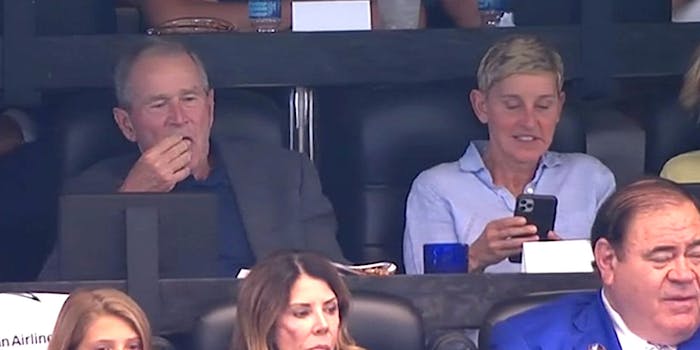 Ellen Degeneres stuck to her guns Monday night when she tweeted out a four-minute monologue discussing her decision to attend a Dallas Cowboys game and sit next to former President George W. Bush.

Yes, that was me at the Cowboys game with George W. Bush over the weekend. Here’s the whole story. pic.twitter.com/AYiwY5gTIS

Degeneres was spotted at the Dallas Cowboys vs. Green Bay Packers game Sunday afternoon sitting next to the former president as a guest of Cowboys owner Jerry Jones.

Laura & George Bush sitting with Ellen Degeneres and Portia de Rossi is not something I expected to see at an NFL game pic.twitter.com/AbWbhXd3RC

Twitter users were quick to point out that not only did Bush back a constitutional ban on same-sex marriage as president, but he is the architect of the War on Terror that continues today.

is it so bad that ellen and george bush are friends? is it so terrible, in these polarising times, to cross the aisle in the spirit of friendship and shared humanity and crack jokes with a guy responsible for the deaths of between 500,000 and 1,000,000 iraqis?

Rather than address the socio-political dimension of the issue, Degeneres made her explanation personal. What looked like an apology promising the “whole story” was ultimately more of an unrepentant defense of her decision.

In the course of the video, Degeneres refers to Bush as a friend.

Degeneres continued, “But just because I don’t agree with someone on everything doesn’t mean that I’m not going to be friends with them. When I say, ‘be kind to one another,’ I don’t only mean the people that think the same way that you do. I mean be kind to everyone.”

In the course of the monologue, she also criticized Twitter users as “referees,” and seemed to brush off criticism from the left, saying, “A lot of people were mad. And they did what people do when they’re mad… they tweet.”

While the explanation likely played well with Ellen’s core network TV audience, the monologue was met with negative responses.

It appears many of you may be genuinely unaware that insiders said NOBODY worked harder to get Brett Kavanaugh on the Supreme Court than George W. Bush.

He fought for a constitutional amendment to ban gay marriage.

And the Iraq War, which was based on a lie, killed millions.

He's a war criminal, Ellen. Directly responsible for the murder of 100s of thousands of Iraqis, largely women, children, and the elderly.

But there were some on Twitter who vigorously took Ellen’s side.

Thank you @TheEllenShow – I wish a lot of your liberal friends would take a page out of your book.

I too have many friends that I disagree with politically but that wouldn't stop me from giving them shirt of my back if they needed it.

We are Americans first!