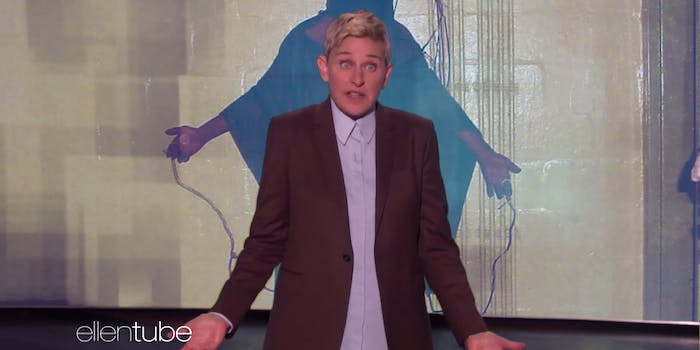 The video's creator has gone viral before.

An edited version of Ellen DeGeneres defending her friendship with George W. Bush is exploding in popularity online. The video shows DeGeneres’ unedited speech while a slideshow of the horrors from the Iraq War plays on the screen behind her. One standout moment occurs at the 1:05 mark of the video where DeGeneres matches the body language of an Abu Ghraib prisoner being tortured in an image behind her.

The edit was originally removed after its creator claims he received unwarranted copyright claims from the Ellen show.

Against Twitter's own fair use policy and against US copyright law, @TheEllenShow successfully convinced Twitter to remove my video. pic.twitter.com/PmjQQHXldN

The clip of DeGeneres addressing her friendly interaction with Bush in a “fancy” private suite at AT&T Stadium in Arlington, Texas was uploaded late Monday night and the pushback was immediate from social media. Many online were not willing to stomach DeGeneres’ advice to befriend those you disagree with. Instead, they saw the defense of her friendship with Bush as class solidarity among the rich and powerful.

Bush’s attempt to constitutionally ban Ellen’s marriage may have been a cynical, disingenuous political stunt with no follow-through, but the same can’t be said about the countries he invaded, the lives he ended, or the people he tortured. That was all very real. https://t.co/n6wlcC5KRn

Disgusting normalization of a war criminal. Proudly saying you're friends with George Bush should get you booed off TV for the rest of your life. https://t.co/LDBxWR1Uww

But you do share the same beliefs, Ellen. You have a fundamental faith in the status quo, in the structural integrity of the system. Don't let anyone say that you and your friend George are different. Your class interests unite you :)

Video editor Rafael Shimunov is one person who was not willing to accept DeGeneres’ call for unity. Shimunov’s edit originally received just over 300 favorites and less than 100 retweets. Shimunov says that the video was removed by Twitter on copyright grounds that he claims ignored the doctrine of fair use. After this, Shimunov uploaded the video to a variety of other platforms and the video started snowballing attention on Twitter once again this week.

Ellen DeGeneres tried to have my video censored by Twitter using a false copyright claim. Now, people are risking their Twitter accounts to reupload it until it goes viral. https://t.co/XpV6WSTSOb pic.twitter.com/68Gpq1k4qs

Now, the video is being re-uploaded by those who agree with Shimunov’s sentiments. Sharers seem aware they might receive a copyright claim and disciplinary action on their Twitter accounts because of the video. However, Shimunov’s unique commentary appears to be worth the risk for them.

following @Of_the_People7, also posting this brilliant @rafaelshimunov video here for everyone… since Ellen has falsely flagged it as copyright infringement in an effort to suppress it. pic.twitter.com/jxrIlDHFCe

This video by @rafaelshimunov, juxtaposing Ellen DeGeneres's apologia for George W. Bush with images of his war crimes, is being removed from Twitter, reportedly by means of bogus copyright claims. Shimunov recommends not posting again after getting a takedown notice. Bring it on pic.twitter.com/xZ3INHY5RW

Shimunov is also responsible for helping prove that the White House deliberately edited footage of reporter Jim Acosta and used it as evidence to revoke his credentials. Through editing, Shimunov was able to prove that the White House doctored a clip of the CNN reporter to make it appear as if he aggressively handled an aide while attempting to ask President Donald Trump a question at a press conference. Acosta’s press pass was eventually reinstated.