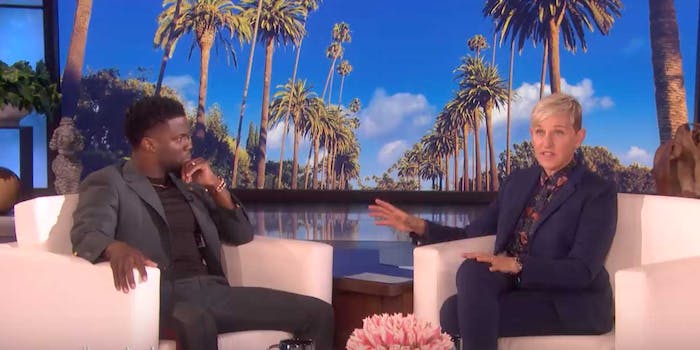 Some are supporting her #OscarsNeedHart campaign, however.

In clips of an interview airing today, Ellen DeGeneres reveals she called the Academy to get Kevin Hart reinstated as host of the 2019 Oscars. It also appears the Academy is interested in reinstating him.

“I called them, I said, ‘Kevin’s on, I have no idea if he wants to come back and host, but what are your thoughts?'” she says in a video clip from her upcoming Ellen DeGeneres Show. “And they were like, ‘Oh my God, we want him to host! We feel like that maybe he misunderstood or it was handled wrong. Maybe we said the wrong thing but we want him to host. Whatever we can do we would be thrilled. And he should host the Oscars.'”

She also tweeted a clip from her show on Twitter late Thursday night, with the hashtag #OscarsNeedHart, garnering some support, even from the LGBTQ community. The resurfacing of Hart’s old homophobic material was what caused the host to step down from hosting in December.

In this conversation, @KevinHart4real was authentic and real, and I’m in his corner. #OscarsNeedHart https://t.co/nhMwSefrMl

I'm with #KevinHart. Everybody makes mistakes. We learn from our trials & tribulations & turn problems into solutions. I fully except his apology. #Oscars2019 #OscarsNeedHart ❣️💟 https://t.co/CsKjsahSQD

We have a sexist, racist president in office but Kevin Hart had to drop out of the Oscars for something he said, and has since evolved his views on, 8 years ago? Good job America 👍🏼 way to stunt growth and applaud ignorance #OscarsNeedHart

#OscarsNeedHart @KevinHart4real @TheEllenShow I support Hart & this convo speaks volumes. Everyone makes mistakes & we can't hold people back for years old words that have been apologized for. There's choice either watch the Oscar's or not, no one is perfect, respect the growth https://t.co/dmgdEm7jZb

However, not everyone’s on board. Many did not understand how DeGeneres, who had to fight tooth-and-nail to come out on network television decades ago, would go to bat for Hart’s homophobic messages. Or why the Academy just can’t choose someone who hasn’t offended a swath of the population.

News flash to straight people: Ellen DeGeneres is neither the ambassador or spokesperson for the LGBTQ community. She doesn't get to grant clemency on behalf of the entire community.

Woof. Ellen Degeneres can personally keep these things to herself. https://t.co/zSZ9Nf6Yhp

Are we *sure* about this #OscarsNeedHart thing? Maybe his career can recover, maybe he'll host in the future, but is there really no one else who might be a little less divisive for this year? Hint: @WhoopiGoldberg.

One user is using the hashtag to actually mobilize people against having him reinstated.

Let's use this hashtag to list everyone and everything that would be a better host than Kevin Hart for this year's Oscars. #OscarsNeedHart

Girls, gays, and non-binary folk get in! We're about to hijack a homophobe's hashtag. 😎 #OscarsNeedHart pic.twitter.com/dOuVBn7C7c

In the Ellen clips, Hart responds that the resurfaced tweets of his homophobic material were “a malicious attack” on his character because it meant people had to weed out more than 40,000 of his tweets. He also implied that it was a smear campaign, and intended to “damage” him, his projects, and his investments. It’s “bigger than the Oscars,” he says—which is precisely the point the LGBTQ community and its allies have been trying to make all along.