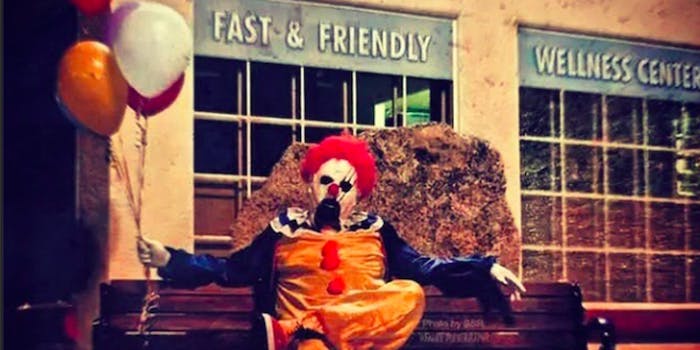 Who is the Wasco clown?

Creepy clowns are so in right now, especially in one California town where masked performers are lurking the streets at night for no discernable reason.

We wouldn’t put it past Ryan Murphy for this to be some covert American Horror Story: Freak Show viral marketing, since his show’s main villain is a terrifying clown with murderous tendencies. Or it could be freaky coincidence. This clown is not on a murder spree. Rather, he just seems  content with creeping everyone out in Wasco, Calif., and there’s an Instagram dedicated to the strange appearances, with more than 15,000 followers already.

Come play with me

Where should I go tonight Bakersfield 🔪🔫 Delano 🔫 Wasco 🔪

There’s nothing illegal about dressing up like a clown and wandering around your town, although there was one arrest in Bakersfield, Calif., related to the clowning, after a teen impersonated the Wasco clown but carried a weapon and chased other teens.

This is also not the first time a town has been stalked by a clown. In Northampton, England last September, a clown was spotted around town knocking on doors and offering to paint houses, but without a paint can in sight. He was eventually unmasked as a 22-year-old aspiring filmmaker.

One report claims that the Wasco clown phenomenon is part of a yearlong husband-and-wife art project, citing the clown himself who wished to remain anonymous. The clown claims they didn’t mean to cause a stir.