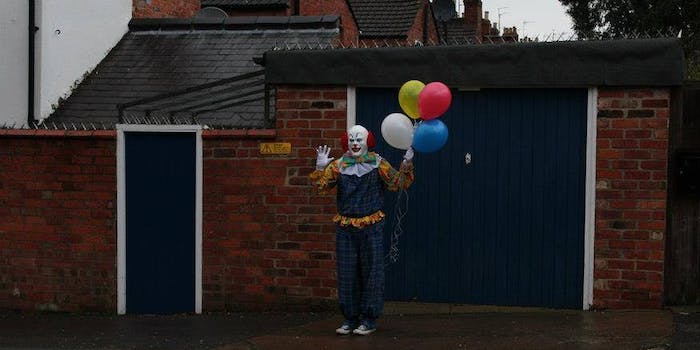 How the Northampton Clown was finally unmasked

The creepy clown responsible for keeping the citizens of the English town of Northampton up at night has finally been identified.

The man is 22-year-old Alex Powell, a student from Northampton University and an aspiring filmmaker, the Daily Mirror reports.

The Mirror solved the month-long mystery after one of its photographers spotted Powell and some friends walking around town.

“Your pictures are from the day I went to meet a little girl who only has six months to live,” Powell told the Mirror. “Her mum messaged me saying she really wants to meet you before she dies. I took a picture with her and gave her a clown teddy and stuff.”

Powell’s clown antics have brought him international attention. Photos of him standing on the sidewalk, creepily staring off into the distance, have been featured on Reddit, the New York Daily News, and the Huffington Post. A Facebook page for the clown, which was run by Powell’s friend Luke Ubanski, has collected more than 187,000 likes.

While most of the attention Powell received was in good fun, he received more than 1,000 death threats on Facebook. He was also threatened in person by someone with a knife.

“I had a call last night from someone who knew my name and asked if I was the clown and said if they saw me they would run me over,” Powell added.

One of the first new organizations to dive into the clown mystery was the Northampton Herald & Post. The newspaper accurately predicted Powell’s identity on Sept. 16 when it uncovered a mockumentary he created called “The Local Clown.” In it, an actor dressed almost exactly like the clown performs mundane tasks like lining a toilet seat and strolling around town.