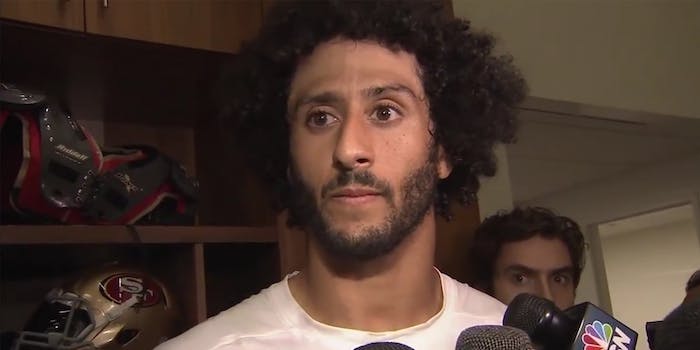 Colin Kaepernick gets support from military members through #VeteransForKaepernick

Some members of the military have his back.

San Francisco 49ers quarterback Colin Kaepernick’s decision last week to stay seated during the national anthem before a preseason game has sparked a national debate and it could end his NFL career. But he’s getting plenty of support from a group critics claim Kaepernick has disrespected.

Over the past few days, Kaepernick has been called a traitor, slammed for disrespecting his country and the men and women who fight for it, blasted as ungrateful, had his immense NFL salary used as a reason he shouldn’t even complain, told that he “should find another country that works better for him,” and deemed “not black” (Kaepernick is biracial).

But now some members of the military are speaking out in support of Kaepernick and his message—or, at the very least, his right to say it.

Using the hashtag #VeteransForKaepernick, service men and women offered a sobering take on the situation. Not only did many of the people using the hashtag, which trended on Twitter and Facebook, support him, they believe he has a point. Some veterans (or veterans’ relatives) fought for a country that later showed them injustice; along with the state of veteran hospitals, some of them saw poor treatment due to the color of their skin.

I serve to protect your freedoms, not a song #VeteransForKaepernick

#VeteransForKaepernick Although my grandfather served two tours in Vietnam, he couldn't even rent a home near his base b/c he was black.

#VeteransForKaepernick because I didn't volunteer to defend a country where police brutality is swept under the rug. pic.twitter.com/LtBkTvHHAn

@Kaepernick7 I served 25yrs in the AF to protect everyone's 1st Amend rights. I support you #VeteransForKaepernick pic.twitter.com/Q7r7PfvryA

Even in disagreement, some had level-headed criticism and respected his right to protest.

May not agree with his method of protest but fought for and respect his right to do it #VeteransForKaepernick pic.twitter.com/XkLqhW0UsZ

Critics who called out Kaepernick’s actions might point out that #VeteransForKaepernick is only a fraction of veterans, but the conversation shows that not every veteran falls under one viewpoint. What’s even greater is that they, too, can speak out about it—that’s what they fought for, after all.