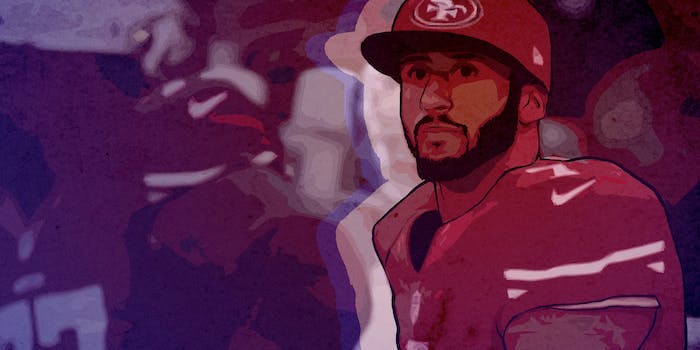 'This is something that has to change.'

Colin Kaepernick‘s standing by his decision.

Before a preseason game on Friday night, the 49ers quarterback decided to sit during the national anthem, and everyone had opinions about it. The NFL backed him up, saying it was Kaepernick’s right to sit, but many fans hastily expressed their outrage on Twitter. Some burned their Kap jerseys. Other showed support.

#49ers TE Bruce Miller: "We're a family in here and we're going to support every guy."

At the heart of Kaepernick’s decision to sit was this statement: “I am not going to stand up to show pride in a flag for a country that oppresses black people and people of color. To me, this is bigger than football and it would be selfish on my part to look the other way. There are bodies in the street and people getting paid leave and getting away with murder.”

And he appears to be standing by this statement. On Sunday, he told reporters that he will continue to sit during the anthem:

I’m going to continue to stand with the people that are being oppressed. To me, this is something that has to change. When there’s significant change and I feel that flag represents what it’s supposed to represent, and this country is representing people the way that it’s supposed to, I’ll stand.

He added that he’s using his high-profile position to call attention to issues like police brutality, and to be a voice for those who “don’t have a platform to talk and have their voices heard, and effect change.”

Corporations have long understood the power of athletes to sell their brand, and pay heftily for it. But Colin is not asking for compensation to sell social justice; in fact, he will likely pay for it. He’s not only standing up to oppression of people of color, he’s standing up to corporate censorship of athletes. Both sports fans and social justice activists alike should crowd-source his message and drive it into as many U.S. homes as possible, for freedom is never free and Colin just made a down payment.

Going deeper, the Intercept pointed out that the third verse of the song, which isn’t sung before sporting events, references slavery and maybe it’s time for a new national anthem.

On Kaepernick’s Twitter account is a quote from a 2002 speech from British politician Iain Duncan Smith: “Do not underestimate the determination of a quiet man.” We’ll likely be hearing a lot more this season—whether or not Kap, a signal-caller who has reached the Super Bowl, makes the team.