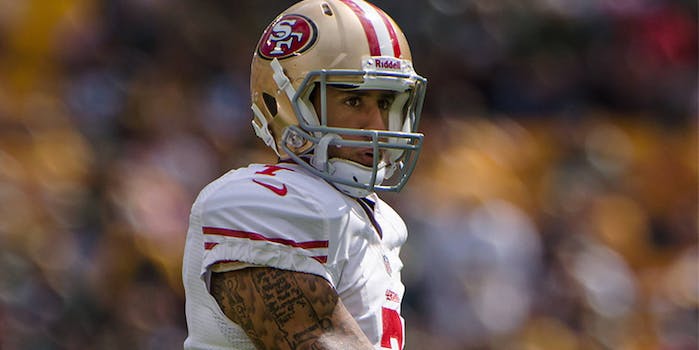 Colin Kaepernick, though, isn't backing down.

San Francisco 49ers quarterback Colin Kaepernick refused to stand for the national anthem before an NFL preseason game on Friday night, explaining that he is “not going to stand up to show pride in a flag for a country that oppresses black people and people of color.”

His actions managed to trigger Donald Trump. And what did Trump have to say about this? That perhaps Kaepernick should find another place to live.

“I think it’s a terrible thing, and you know, maybe he should find a country that works better for him. Let him try, it’s not gonna happen” Trump told a Seattle radio station, via Deadspin.

As Kaepernick has shown in the past, though, he’s not a fan of Trump, either.

But you shouldn’t necessarily expect Kaepernick to vote for Clinton.

“I think the two presidential candidates that we currently have also represent the issues that we have in this country right now,” Kaepernick said recently, via CBSSports.com. “You have Hillary [Clinton], who has called black teens or black kids super predators. You have Donald Trump, who is openly racist.”

The NFL released a statement in lieu of Kaepernick’s actions, saying, “Players are encouraged but not required to stand during the playing of the national anthem.”

Kaepernick sat during a press briefing Sunday night to explain his actions, and he said he is sure about one thing. He will continue to sit during the national anthem as he protests treatment toward black people in the U.S.

Whether it will cost him his spot in the NFL remains to be see.