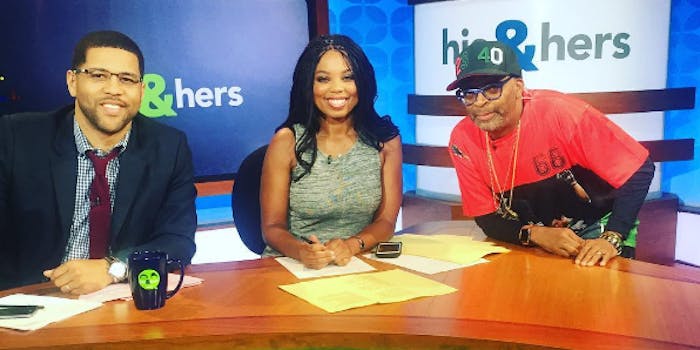 NFL quarterback and activist Colin Kaepernick spoke out in support of ESPN‘s Jemele Hill after a series of political tweets got her into some hot water with the network.

It started Monday evening when the SportsCenter host got in a Twitter discussion about President Donald Trump. The hour-long back and forth started with Hill saying that Trump “is a white supremacist who has largely surrounded himself with other white supremacists,” and that “his rise is a direct result of white supremacy. Period.”

She went on to mention the president’s remarks about the Central Park Five in the late ’80s, and wondered how voters could be upset about Benghazi but unbothered by the way he spoke about those boys in the media.

Trump is the most ignorant, offensive president of my lifetime. His rise is a direct result of white supremacy. Period.

No the media doesn't make it a threat. It IS a threat. He has empowered white supremacists (see: Charlottesville).

ESPN stayed quiet about the tweets until Tuesday afternoon, when it eventually released a statement via its PR Twitter account. The network wrote that Hill’s comments “do not represent the position of ESPN,” and assured viewers that they have “addressed this with Jemele.”

Kaepernick wasn’t satisfied with the gesture, though, and tweeted his support for Hill late Tuesday evening.

The social media firestorm comes as ESPN is criticized on the right for harboring openly liberal TV hosts who often unpack the intersection of sports and politics in debate-like shows. Kaepernick, and his ongoing protests of the national anthem during his tenure as an NFL QB, have been at the center of many ESPN on-air debates.