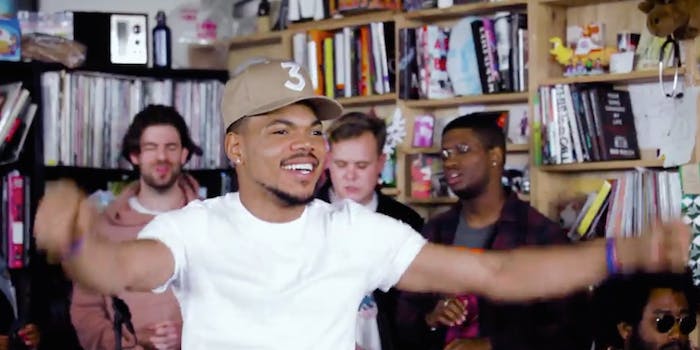 Chance the Rapper has the perfect pick-me-up after a long holiday weekend.

The rapper recently stopped by NPR Music’s offices to perform live for the staff as part of their Tiny Desk Concert series, and today the video of the performance finally went live. Joined by a small band, Chance starts with a live version of “Juke Jam” and then segues into a poem called “The Other Side” that he wrote during the short drive from his hotel to NPR.

He closed out the performance with a stunning cover of Stevie Wonder’s 1974 song “They Won’t Go When I Go.”

“I still have all the keys that are of no use to me,” he read during his poem. “They used to, though. On the other side was a mansion on a hill, complete with L.A. pools and fireplaces and a rim made specifically for people that lie about being six feet to dunk on.”

The rapper has had a busy summer, running a contest for Chicago teens to direct his next video on top of all the touring he’s still doing for last year’s breakthrough Coloring Book album.

“I’m a big fan of the series,” he smiled to the NPR employees who’d stopped working to listen. “And I didn’t know it was actually-actually in an office, so this is very uncouth.”