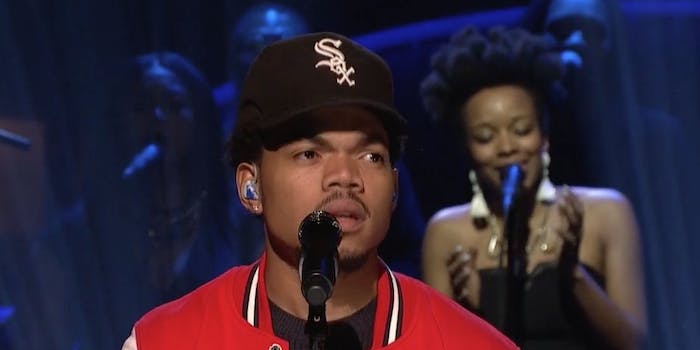 Jamila Woods, Chance the Rapper want Chicago teens to make their next video

The project is the latest step in the rapper's effort to draw attention to Chicago's struggling public schools.

Recording artist Jamila Woods and Chance the Rapper are calling on Chicago high school students to create the music video for their song “LSD.”

The project is the latest step in the rapper’s effort to draw attention to Chicago’s struggling public school system. In March, Chance donated $1 million of his own money to the city’s schools, and in April he raised an additional $2.2 million for their arts programs with the help of the Chicago Bulls and Hannibal Buress. This video with Woods seems like a perfect opportunity to encourage and inspire the same artistic kids they’re hoping to support within the schools.

“The winning video treatment will become a full production shoot with Jamila and Chance,” the call to action explains. “The winning student will shadow the directors and production crew on the set for the day.”  Sounds like a pretty cool internship. But don’t worry—there’s more than one way to win.

“Other submitting students who show promise in the competition will be paired with a film set department head to shadow on the set.”

Looking for a CPS high school student to write the treatment for the LSD music video featuring me & @chancetherapper! Submissions due 6/2 🌊 pic.twitter.com/0Fl4vSRPye

All high school students are encouraged to apply, and submissions are due to [email protected] by June 2.