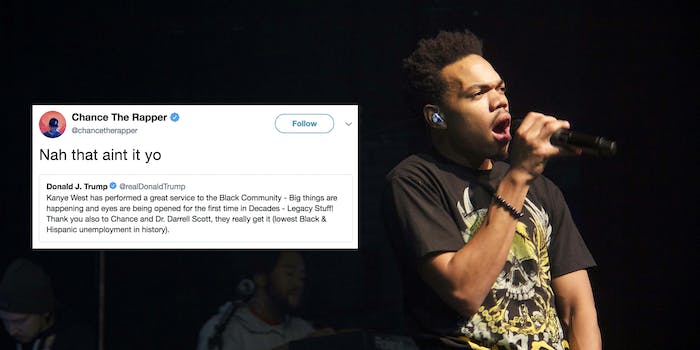 He wants the Black community to know that he still 100 percent with them.

Chance the Rapper made it clear on Friday that he doesn’t support President Trump or Kanye West’s controversial views about the Black community.

Early in the morning, Trump tweeted praises for West, Chance, and Dr. Darrell Scott. West came out in full support of Trump earlier in the week and after Chance tweeted in defense of West, Trump perceived it as a vote of support from him as well.

Black people don’t have to be democrats.

Kanye West has performed a great service to the Black Community – Big things are happening and eyes are being opened for the first time in Decades – Legacy Stuff! Thank you also to Chance and Dr. Darrell Scott, they really get it (lowest Black & Hispanic unemployment in history).

Chance both quote-tweeted the president and posted a lengthy statement clarifying that while he supports West’s right to have his own opinion, he in no way supports Trump.

Nah that aint it yo https://t.co/hqA1NYGxE2

“Anyone who knows me knows how passionate I am about my city and my loved ones,” his statement begins. “Kanye West is not just a mentor or big homie to me. He’s my family. No matter how much I may disagree with him, it’s hard for me to watch people talk about someone I love—even if they were justified in doing so.”

Chance continues to explain that he didn’t stand up for West because he “fucks with Trump,” but because he wanted to help his friend. But now he’s reconciling with the fact that his tweet has been used to discredit his “brothers and sisters in the movement” who are working for racial equality.

“I’d never support anyone who has made a career out of hatred, racism and discrimination,” he said. “I’d never support someone who’d talk about Chicago as if it’s hell on earth and then take steps to make life harder here for the most disenfranchised among us. I understand why people are disappointed with my words, but I was raised to believe actions speak louder than words. So let my apology be seen in my future works, and let me make up for my poorly timed comments with immediate action and advocacy for those who need it most.”

He then explained that his tweet, “Black people don’t have to be democrats,” was a comment about the fact that Chicago has had generations of Democratic officials with “no investment or regard” for Black people.

“We have to talk honestly about what is happening and has been happening in this country and we have to challenge those who are responsible, as well as those giving them a pass,” he said. “If that happens to include someone I love, someone who is my brother-in-Christ and someone who I believe does really want to do what is right, it’s not my job to defend or protect him. It’s my job to pick up the phone and talk to him about it.”