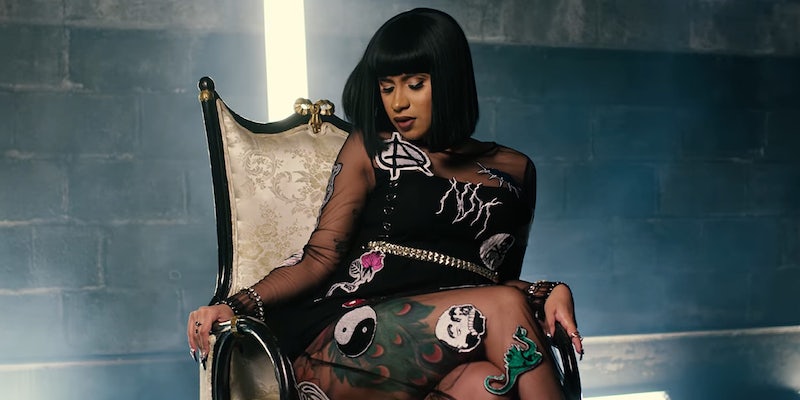 It’s safe to say that 2018 has so far been the year of Cardi B, which means she had big expectations to fill for her first-ever Met Gala in her hometown of New York City Monday night. The annual event, co-hosted by Vogue and the Metropolitan Museum of Art, invites pop culture’s biggest celebrities to dress up in a museum-oriented theme and attend a huge gala party in conjunction with an exhibit. Over the years, it’s come to be one of Hollywood’s biggest (and most daring) fashion nights.

If Cardi B doesn’t show up to the Met Gala looking like a whole Latina Guadalupe prayer candle I’m gonna be pissed.

Luckily, the rapper knocked it out of the park. Cardi currently has nine simultaneous songs on the Billboard’s Hot 100 chart, a baby on the way, and “came through drippin” in head-to-toe Moschino with designer Jeremy Scott on her arm.

Fans on Twitter were impressed by her interpretation of the night’s “Heavenly Bodies: Fashion and the Catholic Imagination” theme, to say the least:

Cardi B in her Met Gala fit looks like the goddess you pray to to get knocked up. I feel like I might get pregnant just looking at her. Lawd.

Cardi B letting us ALL know who's QUEEN OF THE DAMN Bronx. Eowwwwww –#MetGala pic.twitter.com/zO1kACutxy

She even managed to squeeze in a photo-op squashing beef rumors between her and fellow New Yorker Nicki Minaj:

Nicki Minaj, Jeremy Scott and Cardi B at the 2018 #MetGala / "Visitation", from Altarpiece of the Virgin (St Vaast Altarpiece) by Jacques Daret, c. 1435 pic.twitter.com/V5MKBYoxvu