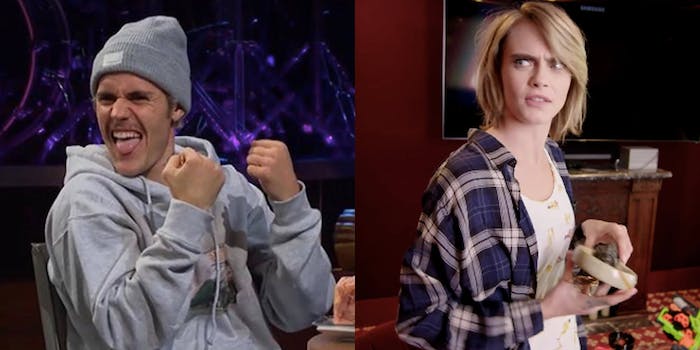 She also accused him of blocking her online.

If somebody ever asks you to rate your significant other’s friends in order of how much you like them on national TV, here’s an easy tip: don’t do it.

It’s advice Justin Bieber would have been wise to consider during his recent appearance on The Late Late Show With James Corden. But considering he’s not exactly known for making smart choices, the “Baby” singer is now facing pushback from the woman he ranked last—Cara Delevingne.

Delevingne shared a clip of Bieber’s ill-advised decision to her Instagram on Friday. In it, Corden asks the smirking singer to rank wife Hailey’s celebrity pals Gigi Hadid, Kendall Jenner, and Delevingne, from his favorite to his least favorite. His other option, as the game goes, is to take a bite from a bull penis.

Bieber doesn’t even hesitate, clearly getting off on the crowd’s desire for any controversial choices. Even Corden suggests there’s no way he’ll actually do it because no thinking person would actually do this, but he rattles them off with ease: Kendall, Gigi, and then Cara.

But the model-turned-actress called his bluff, sharing photos of a younger Biebs gawking at her at a Victoria’s Secret show and the two of them hanging out one on one and appearing to be having a great time.

“If you have nothing against me, then why don’t you unblock me?” Delevingne wrote on Instagram. “Love you @haileybieber – he should have just eaten the bull penis.”

The Biebers haven’t been getting along so well with anyone from Taylor Swift’s squad after Swift called out his manager and BFF Scooter Braun for scooping up her entire back catalog of music and allegedly bullying her over the years.

After Swift’s public call out, Bieber decided to jump into the fray, defending Braun and scolding Tay, ultimately prompting a response from Delevingne.

“I wish you spent less time sticking up for men and more time trying to understand women and respecting their valid reactions,” she wrote on his Instagram post. “As a married man, you should be lifting women up instead of tearing them down because you are threatened. I am not sure you actually understand what an apology is.”

She continued: “The issue that @taylorswift is talking about is far more than a picture and you know that. As you said, you haven’t spoken to her in years which means you definitely don’t understand the situation. I do. Take a step back and try and learn from this. We should all be on the same team.”

It now sounds as if Bieber may have blocked Delevingne after her response to his unnecessary post. While neither Justin nor Hailey has responded to Delevingne’s latest Insta yet, it may be for the best. Sometimes, when you think you’ve got something the world absolutely needs to hear, it might be better to swallow your words, and swallow that bull penis.