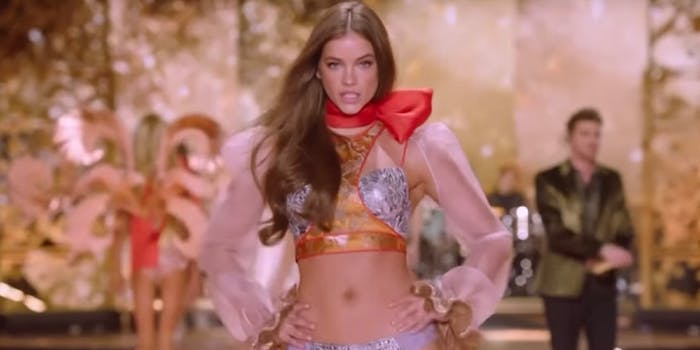 'Shouldn’t you have transsexuals in the show? No. No, I don’t think we should.'

Victoria’s Secret came under fire on social media Friday after an executive for the lingerie brand’s parent company made comments about why it doesn’t use transgender models in an interview with Vogue.

Asked if Victoria’s Secret had considered hiring transgender models for its advertising, Ed Razek, chief marketing officer of Limited Brands, said the company had considered it but ultimately decided not to.

“If you’re asking if we’ve considered putting a transgender model in the show or looked at putting a plus-size model in the show, we have,” Razek said. “We invented the plus-size model show in what was our sister division, Lane Bryant. Lane Bryant still sells plus-size lingerie, but it sells a specific range, just like every specialty retailer in the world sells a range of clothing. As do we. We market to who we sell to, and we don’t market to the whole world.”

Twitter user @doombuggys tweeted the interview segment, writing, “It’s incredible tht they think this is an acceptable argument. they have [so much] power over young people’s body image, power to actually address tht ‘hey! not everyone looks like kendall jenner bc they cant hire a nutritionist/personal trainer/get surgery’. this is just laziness.”

As the conversation shifted to criticism of Victoria’s Secret on Instagram, Razek doubled down on saying the company had no plans to hire trans models for its fashion shows.

“It’s like, why doesn’t your show do this?” Razek said. “Shouldn’t you have transsexuals in the show? No. No, I don’t think we should. Well, why not? Because the show is a fantasy. It’s a 42-minute entertainment special. That’s what it is.”

The New York Daily News reports that L Brands will officially announce Singer’s resignation on Monday. After receiving criticism on social media last week, Razek reversed his comments in a statement saying that the company would “absolutely” cast a trans model.

“We’ve had transgender models come to castings,” the statement said. “And like many others, they didn’t make it.”