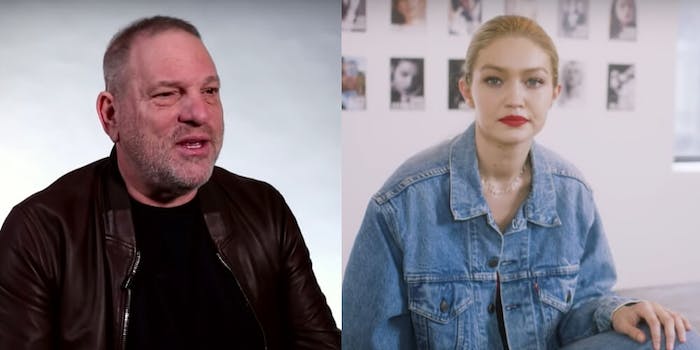 Hadid says she will keep an 'open mind.'

Gigi Hadid, supermodel and dutiful citizen, appeared for jury duty Monday morning for the Harvey Weinstein trial. More patriotic than most, Hadid did not try to evade jury duty and instead reported to the State Supreme Court in Manhattan bright and early.

Hadid was one of 120 New Yorkers summoned Monday for jury duty for the case. Weinstein is charged with raping a woman in 2013 and forcing oral sex on another woman in 2006, according to NBC. Weinstein denies the charges and alleges the acts were consensual.

More than 2,000 New Yorkers have reportedly already been summoned for the jury selection process, and hundreds have been dismissed over scheduling issues or potential bias. When Judge James Burke asked the potential jurors if they had met anyone in the courtroom previously, Hadid admitted to knowing both the defendant and potential witness Salma Hayek.

When Burke asked Hadid, “Is there anything about having met them that makes you unable to be an impartial juror?” Hadid responded, “I think I’m still able to keep an open mind on the facts,” according to BuzzFeed News.

By the end of the day, 35 potential jurors remained, according to People. A court officer asked the potential jurors who had not been dismissed if they would be able and willing to serve on the jury. Hadid answered yes and was given a questionnaire. She is expected to return to court later this week to move forward in the selection process.

Weinstein’s team submitted a motion earlier this week in an attempt to bar the media from attending the questioning of potential jurors. Judge Burke denied the motion, so there will likely be more news to follow in the upcoming weeks.

As Hadid left the courthouse, reporters asked if she would serve as a juror. Hadid dodged them by saying she was not legally permitted to discuss the trial, according to BuzzFeed News.